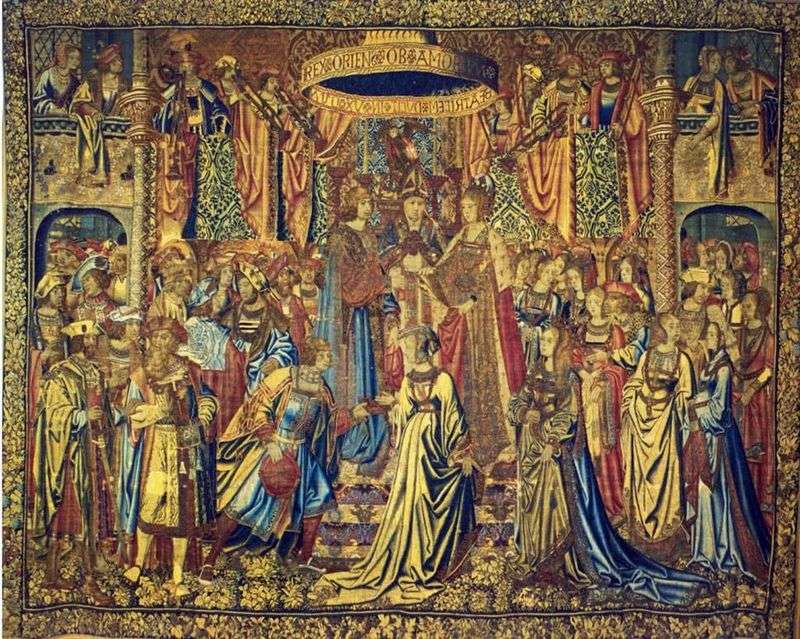 The art of Tapestry, a lint-free woven carpet, is rooted in deep antiquity. It was known in ancient Egypt.

In Europe, tapestry weaving originated in the Middle Ages in Germany. Large carpets-paintings of religious, literary, fairytale scenes, woven from colored woolen threads, were insulated and decorated with cold walls of feudal stone castles and churches. Production lanes very quickly spread, and above all – in the north of Europe. In the XIV century, numerous tapestry manufactories appeared in Paris and in the cities of Flanders; Flemish tapestries, distinguished by their special beauty and the highest quality, conquered the whole of Europe.

From the 14th century, Brussels, the main city of the Duchy of Brabant, became the largest and most famous center of tapestry production. At the beginning of the 16th century, one of the finest tapestries in the collection, part of the famous Legend of the Sablonian Madonna series, was commissioned by an important dignitary, the head of the Habsburg court in Brussels, Franz Turn de Tacis.

The author of the cardboard – a pictorial sketch of a future woven composition that serves as the basis for the work of the weavers – was Bernard van Orley. Brussels painter, he belonged to a circle of Dutch “novelists” – artists who introduced the trends and techniques of the Italian Renaissance to Dutch painting. The monumental composition with the space unrolled in depth is filled with large, calm, strictly contoured silhouettes of figures united by an unhurried solemn rhythm. Ornamental columns divide it into three parts; on the sides are episodes of a legend telling about the Virgin Mary, who appeared in a dream to nun Beatrice and commanded her to be moved from Antwerp and to set up her sculpture in the Brussels Cathedral.

In the center, in the foreground, against the background of the interior of the cathedral, are placed the figures of the Duke of Braban and the customer of the trellis, Turn de Tacis, in front of them, on her knees, the nun Beatrice. Translated into a multicolor, complex in shades, colored fabric, the composition impresses with splendor, decorative richness and magnificence. It is framed by a luxurious ornamental border, in the upper and lower parts of which the text of a famous legend is woven.