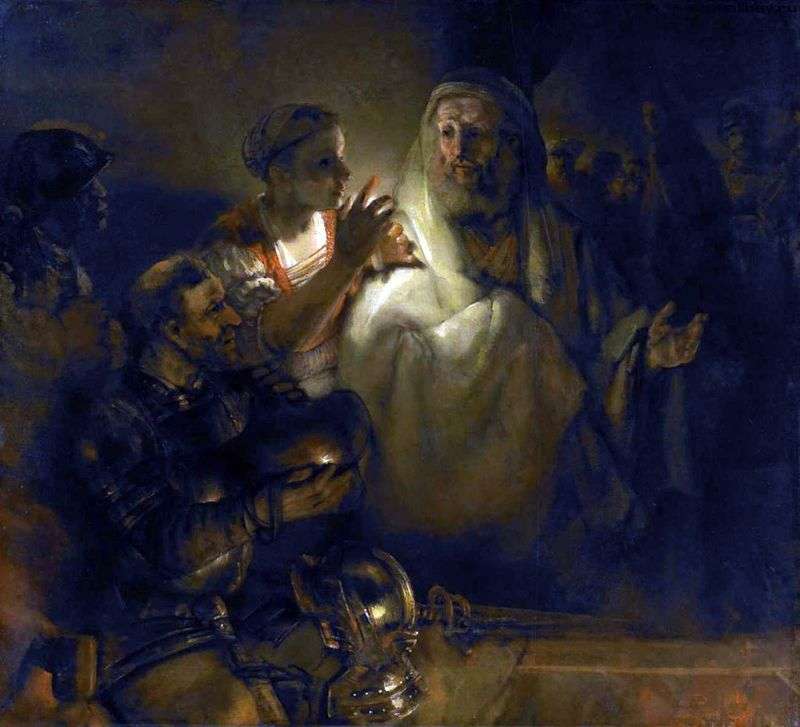 Painting of the Dutch painter Rembrandt van Rijn “Renunciation of the Apostle Peter”. The size of the painting is 154 x 169 cm, oil on canvas. Man faces a choice. A person who does not cope and is still called upon to go his own way, to fulfill his task. Man is at odds with himself, in contradiction, a contemporary of Rembrandt; the creative dialectic of the artist again and again puts him before the trials of life, critically and with participation.

The Rembrandt picture clearly follows the text of the Apostle Luke, only there is that remarkable sentence, which was figuratively transformed by Rembrandt psychology: “Then the Lord, turning, looked at Peter…”. “As a powerful block, enveloped in broad planes of a woolen cloak, the overweight figure of Peter rises. The apostle’s strong face is firmly and heavily framed with an open forehead, a straight noble nose, a smooth beard and large kind eyes.

As a statue designed for eternity, his figure grows up among a crowd of rude and cruel people: maidservants and guards… A guard of the front group, written even for that time with extraordinary volume, threatens to destroy the entire composition. More acutely than in the expression of Peter’s face, Peter’s striving to remain faithful is felt in this unbalanced composition.

The rough and vulgar figures of this group, which form the genre picture, by the weight of their bodies and the ordinary existence suppress the apostle, not understanding its dignity and greatness. The uncouth warrior, sitting on the edge of the well, put his short sword on its edge, put his beautiful, beautifully written helmet on his knee and prepared to drink a strong sip from the flask. The maid, feeling confidently surrounded by her armed friends, shines apostle cheekily in the face, clumsily putting his hand with candles on his shoulder, and the other, as a reflector, directs the light on the noble face. She had already uttered the words: “And this one was with him.” The drinker removes the flask, his eyes darken, the guard behind him listens, preparing to grab the suspicious.

A monstrously tense moment! Peter renounces his teacher. His look is so innocent that no one doubts him, but he does not stand up. He tries to leave, dodge. The movement of both hands betrays it… Peter does not even blush, or rather, Rembrandt, with a strange dim red light filling the whole picture, makes it so that no one notices, even the viewer looking at the picture. “