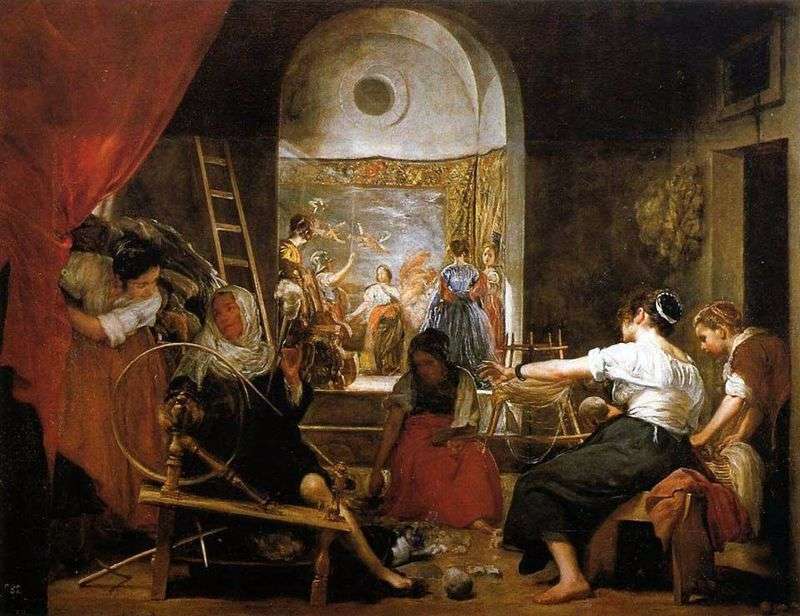 For a long time this picture was called “Pryakhi” or “The Tapestry Factory of Santa Isabel in Madrid”. However, in 1948, Diego Angulo Iniguez pointed out the connection between the description of Velasquez scene and the legend of Arachne. Indeed, if the picture of the scene from the life of weavers tapestries, it is unclear what is happening in the background. But remember the legend: Athena Palada, the goddess who gives wisdom and knowledge, teaches people about the arts and crafts, a dispute arose with the young girl Arachna.

Arachne was famous for her art of weaving. “Arachne spun from fabrics like fog, fabrics that were as transparent as air.” She was proud that she had no equal in the world in the art of weaving. ” “And here, under the guise of a gray, hunched old woman, leaning on her staff, Arachne, the goddess Athena, appeared to her and said to her:” It’s not only evil that carries with itself, Arachne, old age: years bring experience. “Obey my advice: strive to surpass mortals only Do not summon a goddess to a match.

Humbly pray to forgive you for haughty words, praying forgive the goddess. “Arachne lost the match and Athena turned her into a spider-Arachne. If you accept the version that the artist was inspired by Ovid’s book” Metamorphosis “, which, of course, was in his library, then the picture becomes clear.

Thus, a young woman, on the left – Arachne; At the spinning wheel – Athena, in the image of an old woman. In the background of the picture, in the way of “simultaneous episodes,” the second part of the legend is shown: Arachne stands before her gobelin, woven on the theme “Abduction of Europe” According to the picture of Titian. Nearby – Athena, in a helmet and armor. Three women, on the right, can symbolize the Goddess of Fate.