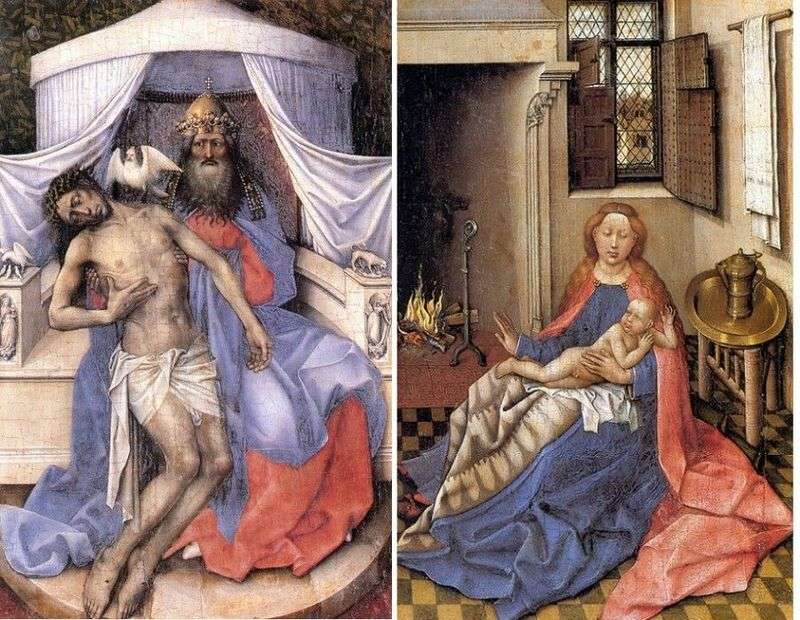 A small oak folding, on the left wing of which is depicted “Trinity”, on the right – “Madonna and Child”, was executed in the 30s of the XV century, in the period of the rise and flowering of Dutch painting. Currently, most researchers identify his author with the painter Robert Kampen, who worked in the city of Turn. Initially, the creator of the diptych was conventionally called the Master with a mousetrap, then the Master of the altar of Merode and, finally, the Master of the Flemal altar or simply the Flemal master. The latter name arose from the erroneous assumption that the artist’s

main work was written for the abbey of Flemal.

The Hermitage diptych is a monument of a transitional era, in which innovations are combined with the conservative traditions of the past. The image of the “Trinity”, symbolic and abstract, is based on the icon-painting scheme worked out in the previous era. The figures seem frozen and angular. The god who sits on the throne is cut off from all earthly things, full of greatness and solemnity. In the “Madonna with the Child” there is almost nothing traditionally icon-painting. Madonna – a young Dutch woman, with simple and even rude features. She swaddles the baby, and not to bother him with the touch of a cold hand, he warms the palm of the fireplace.

The scene is imbued with the poetry of a quiet, everyday life, the mood of tranquility, hospitality and coziness. The picture gives an idea of the situation in which the Dutch burghers of the 15th century lived. The artist wrote out the smallest details and, admiring each thing, managed to convey their texture, volume, density, weight. The objects appear before us in all tangible concreteness: we see how the bronze of the laver shines, how a white towel is starched; We feel how soft the fur is, how the caps of the numerous nails that fasten the shutters of the window are emitted; we feel a faint glint of stone floor tiles. Creating a diptych, Robert Kampen successfully used Yan’s fan-fired Eikom technique of oil painting. “Trinity” and “Madonna and Child” are distinguished by the extraordinary beauty of color, the basis of which are cold, red and blue colors. Diptych entered the museum in 1845 from the collection of DP Tatishchev in St. Petersburg.