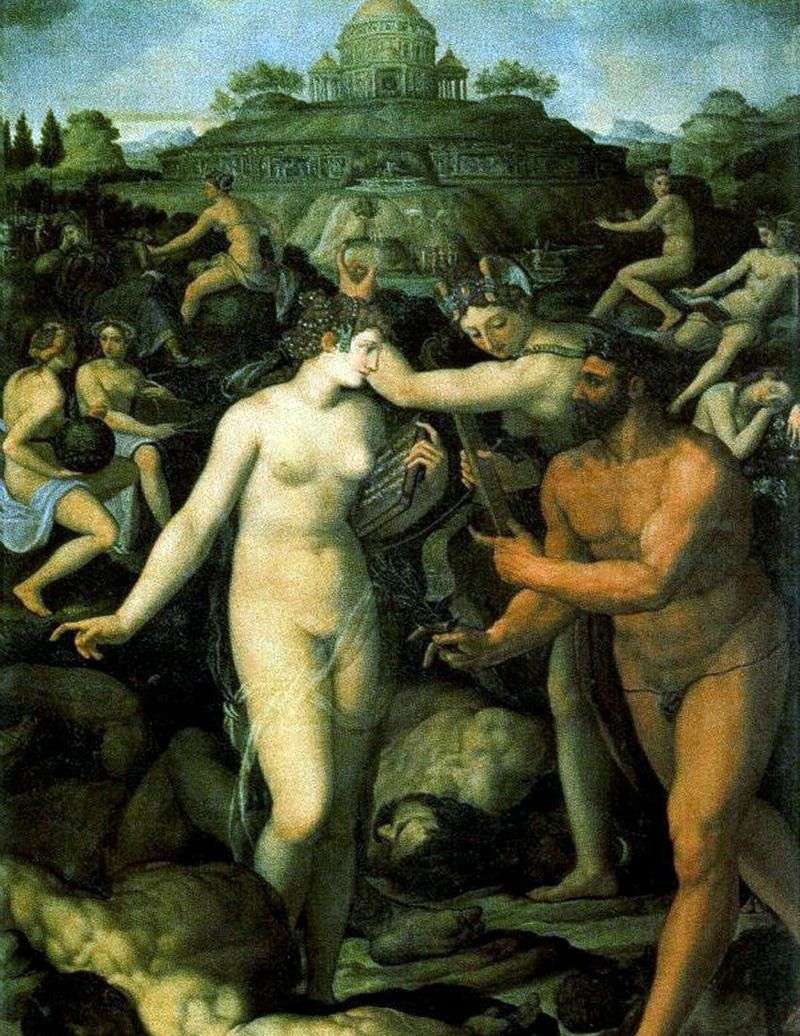 The painting by Florentine artist Alessandro Allori “Hercules and Muse”. The size of the picture is 39 x 29 cm, copper, oil. The cult of Hercules was common among the Hellenic people. Celebrations in honor of Hercules were called Heracles and existed in Sikyon, in Thebes and other places of ancient Greece.

As a representative of power, Hercules was recognized as the patron of all gymnasiums and palaestres; The gladiators in Rome dedicated their weapons to Hercules. When the hero of the ancient Greek myths Hercules rested after the victory, he liked to delight his ears with music and singing: hence his attitude towards the muses. Muse – mythical female creatures of the ancient Greeks. Homer in the Iliad and the oldest Greek poetry more often call only one muse, who knows everything that a man yearns to know about the gods, the secrets of the universe and the fate of heroes. In other ancient Greek legends, muzes live on Olympus and amuse themselves with the singing of feasting gods.

The musicians love and support the singer who recognizes that he is indebted to them all, and punish the daring, thinking to surpass them in singing: thus, they blinded Thracian’s Thracian singer for this and deprived him of the gift of singing. Already in the “Odyssey” muses there are nine. The names of the muses from the time of Hesiod, established the following: Calliope, Clio, Euterpe, Thalia, Melpomene, Terpsichore, Erato, Polyhymnia, Urania. Parents of music in mythology are Zeus and Mnemosyne. Their significance was limited to poetry, singing and dancing, which, according to the poets, they patronized together.

A more precise distinction between the areas of activity of individual muses originates only from the time of the Alexandrian epoch. The development of the artistic types of the Muses was influenced by the Delphian Temple of Apollo, on the pediment of which Apollo and the Muses were depicted; An important role was played also by the groups of Helikon, created, for the most part, by Kefysodot, the father of Praxitel. In Mantine, reliefs of the foot are found, of which one depicts the match of Apollo with Marcia in singing, and on each of the other two are depicted three muses.