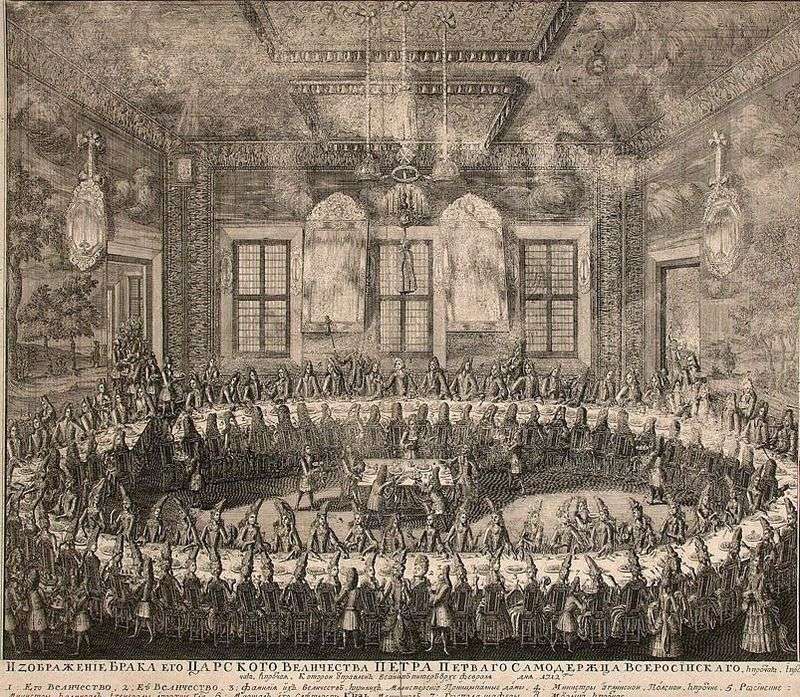 The outstanding Russian engraver of the Petrovsky era Alexei Zubov studied and worked with Adrian Shkhonbek in the Armory in Moscow. The engraving, saturated with details and characters, with the scene of the Wedding of Peter I and Catherine I represents the audience a large hall, the walls and ceiling of which are decorated with woven tapestries, mirrors and carpets.

Numerous tables are put one after another in the form of a closed letter O. In the foreground between the ladies in the half-turn Catherine I sits, on the second – Peter I and Alexander Menshikov, who was a ceremonial master at the wedding. All depicted dressed in European fashion, in the Western manner. Ladies – in elegant robe dresses with towered hairdos, men – in caftans and wigs.

Through the open side doors other tables are visible, behind which the other guests sit. Everything is presented solemnly and ceremonially. Engraving did not have a signature, but it was printed in the St. Petersburg printing house, where at that time the only master worked – Alexei Zubov. It is interesting that as a model he chose the work of his teacher “The Wedding of Theophylact of Shansky in the Palace of Lefort”.