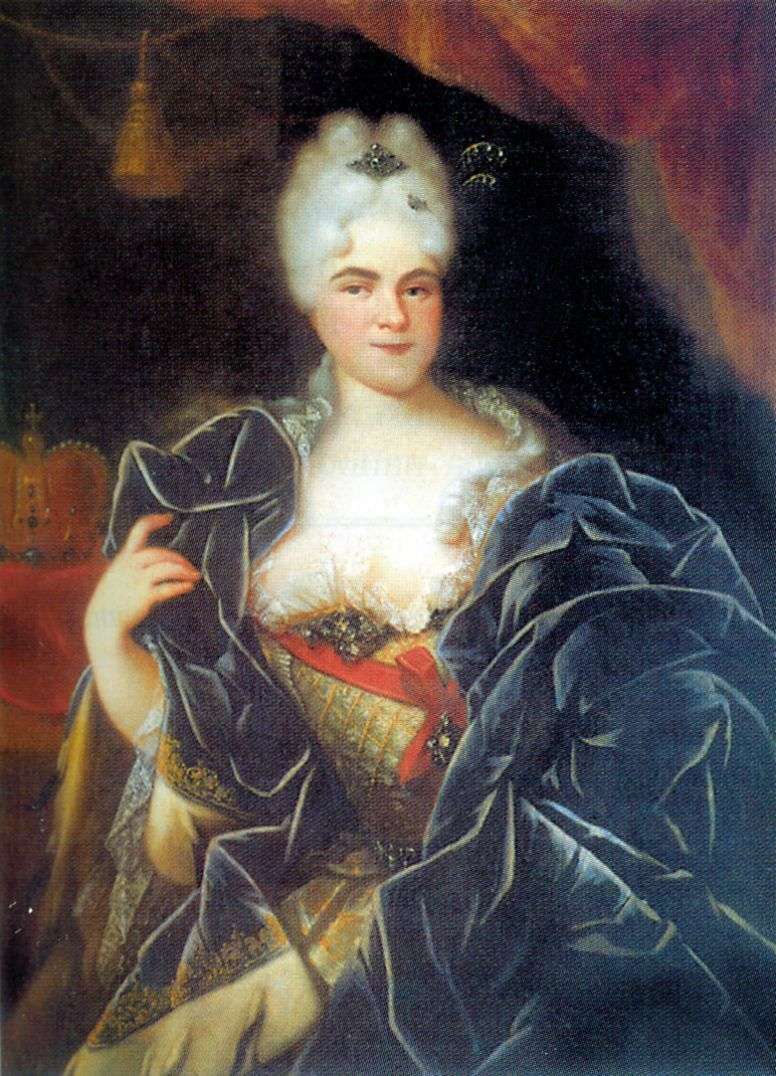 Catherine I Alekseevna, All-Russian Empress, was born on April 5, 1684 in Livonia, in a peasant family of Skavronskys, of Lithuanian or Latvian origin. When baptized according to the Catholic rite, she was named Martha. Having lost her parents early, she found shelter with her aunt Veselovskaya, who lived in Kreuzburg, from which, at the age of 12, she served the Marienburg superintendent Gluck and grew up with his children.

A Protestant theologian and learned linguist, Gluck educated her in the rules of the Lutheran faith, but did not learn to read and write. In the 18th year of her life, Marta married Swedish Dragoon Johann, who soon went with a regiment to the march. After the capture of Marienburg in 1702 by the Russians, she was captured and, thanks to her beauty and glibness, she went to Sheremetev and then to Menshikov. In 1703, Tsar Peter saw Martha and soon placed her in the village of Preobrazhensky among the court maidens of Princess Natalia, where she converted to Orthodoxy and was named Ekaterina Alekseevna, since her godfather was Tsarevich Alexei.

Who knew how to apply easily to all circumstances and never lost her presence of mind, Catherine acquired a tremendous influence on Peter, having studied his character and habits and became necessary for him both in joy and in grief. In 1711, she accompanied the king in the Prussian campaign and, with her resourcefulness, did a great service to Peter and Russia. Upon returning to Petersburg, Peter on February 19, 1712 entered into an official marriage with her, and at the same time both their daughters, Anna and Elizaveta, were “crowned”.

After the death of Tsarevich Alexei, Peter began to see his future successor in his wife, but his passion for the chamber-cadet Mons dealt Peter a terrible blow; executing the favorite, the king broke the will, in which the throne was to go to Catherine. Upon the death of Peter, who did not have time to declare his last will, the decision of the question of succession passed into the hands of “supreme masters” – members of the Senate, the Synod and the generals who came to the palace on the night of January 27-28, 1725. Two parties were among them. With the support of P. A. Tolstoy and the Guards regiments surrounding the palace, Ekaterina Alekseevna was declared Empress.

Peter’s energetic and intelligent companion found herself, outside the narrow sphere of family-court relations, completely incapable of independent state activity. She had no education, no experience in business, not even a hunt for them, but only one long-held passion for pleasure. She transferred the burden of the government to a person who was already close to her, whose interests were tightly connected with her interests – Menshikov.