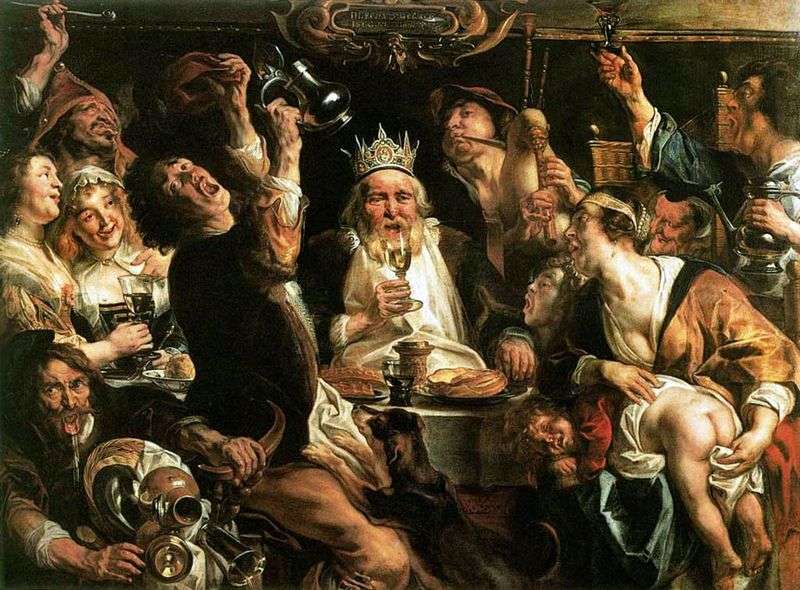 The work of Jacob Jordaens, the largest artist of Flanders in the 17th century, continues the traditions of the Flemish school of Rubens. After the death of Rubens, Jordaens becomes the head of this trend. Being one of the best pupils of the great painter, he learned a lot from him, while retaining his own individual traits.

Jacob Jordaens was born in a burgher environment. For whatever themes he took in his work – mythological, religious, allegorical – he always remained a realist who managed to preserve a healthy people’s principle. The main idea of his work was to capture the real life

in all its movement and infinite variety. His favorite genre is everyday. He writes pictures on a variety of subjects, but his compositions are most well known on everyday subjects.

“King drinks” is a sketch of a merry feast in a rich Flemish house. Warmed up by the participants in the party are noisy and rude. Among their lively faces stands the old man’s head in a ridiculous prank crown. He was proclaimed “king” for this evening. The whole scene captures and captivates with sincerity and ease of fun.

This theme of family feasts is repeated many times by the artist in other canvases: tables abound with treats, faces shine with pleasure and drunk wine, spread out in smiles. Jordans is fond of the effects of contrasts of shadow and light. Color saturation gives compositions, always splashing fun, a special festivity. The artist sought his subjects and images in the people’s, peasant environment.

In another common story – “The Satyr Visiting a Peasant”, written on the theme of the Aesop Fable, the ancient legend acquires national Flemish traits. Many variants of this picture are available in almost all European museums.

Painting Jordaens is very decorative. It has a special juiciness of colors, freedom and plastic force. All the works of the artist have typical national features, reflected with the greatest possible completeness and distinct straightness.