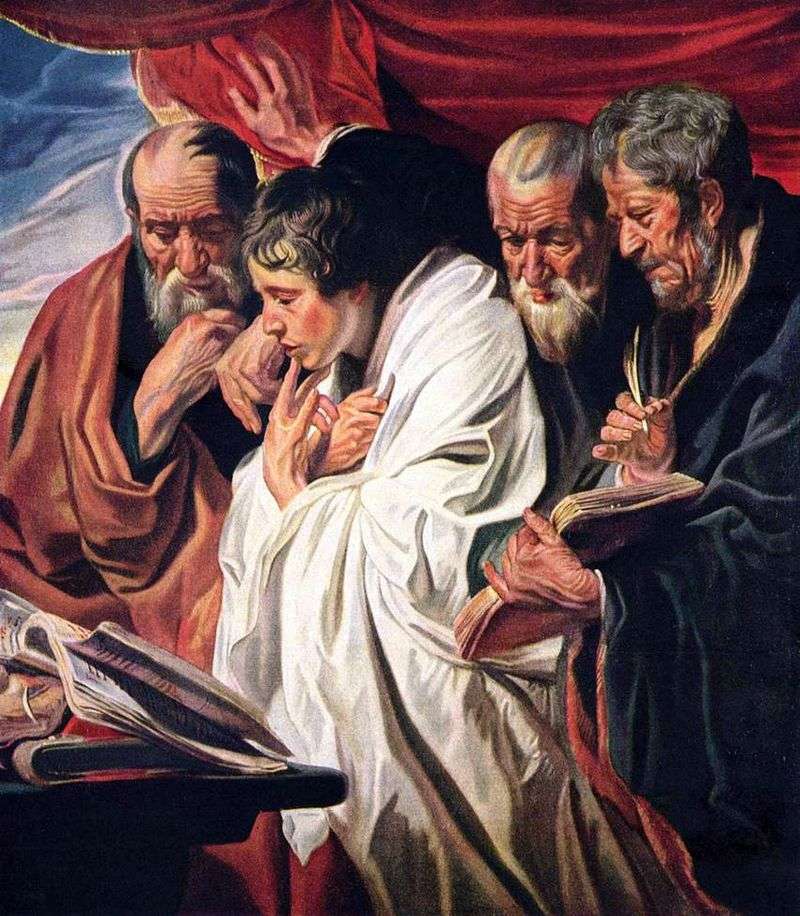 Painting of the Flemish painter Jacob Jordaens “Four Evangelists”. The size of the painting is 133 x 118 cm, canvas, oil. The work of the early period of the artist’s work. The four evangelists contemplate the Holy Scripture, which, in turn, was the source of inspiration for their own writings.

While they are immersed in the study of the text of the Bible resting on the table, Jordan allows us to appreciate the difference of their individualities. Half-figures dominate in space, almost completely covering the background, formed by the wine-red velvet curtain and the sky. Evangelists or evangelists are called the authors of the four classical gospels – the holy apostles Matthew, Mark, Luke and John.

In ancient times this name was wider; it was applied to all preachers of the Gospel or the word of God. Among Protestant peoples, such use of the word has survived and hitherto: it is attached to them for missionaries and to all individuals who seek to revive society by preaching the teachings of Christ in the Gospels.

In the ancient church there was a special degree or position – the evangelists, especially for preaching the Gospel among Jews and Gentiles. Contemporary Peter Paul Rubens, Jordaens took from his older friend the liveliness of color and brush, as well as the skill in the transfer of natural bodily tones. However, the strong, energetic realism of his compositions is due more to the influence of Caravaggio, whose style Jordaens could see reflected in the works of the followers of the Italian painter in Utrecht.

The artist’s early paintings are technically imperfect, but differ in a rough, strong expressiveness; However, Jacob Jordaens developed as a painter, over time his style became more restrained; Later, Jordans was supported by the kings of Spain and Sweden, the sovereign dukes of other lands.