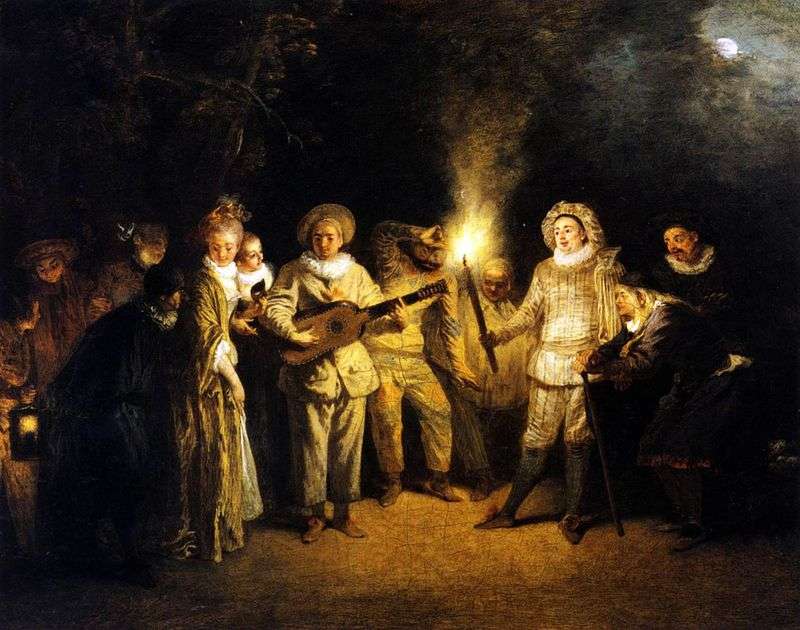 Painting of the French painter Antoine Watteau “Italian comedy del arte”. The size of the painting is 37 x 48 cm, canvas, oil. This painting also has another name: “Love in the Italian theater comedy del arte”. Comedy del arte – a special kind of dramatic performances, played in Italy in the XVI, XVII and XVIII centuries. There is an indication of their existence in Northern Italy at the end of the XV century. They were usually played by troupes of professional actors on a short libretto, where the action of each scene was briefly described.

Their origin goes back to the medieval folk beliefs of the buffoons, the descendants of the Roman ghastrians and Atetlans. Their connection with popular beliefs is evident from the clownish tricks of the jester servants, who made up most of these ideas. Lazzi are very similar to typical buffoonery tricks.

The name of one of the servants-jesters, Harlequin, is related to the name of one trait of Arlequino and Hellequin of the Old French play of Adam de la Gal; in all likelihood, it turned into comedy del arte through the images of hell in medieval religious plays. Other favorite types of comedy characters are Brighella, Pulcinella, Pedrolino, Vilano and Mazzitino – also of national origin.

In the sixteenth century comedy del arte experienced a strong influence of the written classical comedy. The main plots in both comedies are very close and it is difficult to separate them from one another. There was also an average type of half-written comedy, where the main scenes were written, and the roles of the jesters were performed without written text.

The main actors: Dottore, Pantalone, Capito, Colombina, Scaramacci Franca-Trippa, young lovers and others, also belong simultaneously to the written and improvised comedy del arte. Their resemblance to the types of Plavtian comedy: Pantalone and Dottore with two old men and Captain with the Bragging Warrior shows their literary origins.

But all these types are so used to the Italian soil, so updated on it that they can be considered creatures of folk art. For example, Capito became a satire on the Spanish officers. Dottore portrayed the professor of law, Pantalone – a merchant, kind small, red-haired and dandy, constantly in love and constantly in a fool. These types became specific representatives of certain localities of Italy; Pantaloon was considered a Venetian and spoke in a Venetian dialect, Dottore spoke in mixed Latin and Bolognese dialect, and sometimes in the Ferrarian dialect, Capotinum poured Spaniards, Scaramaccia spoke Neapolitan, and Harlequin as a peasant from Bergamo.

Each actor played constantly the same role and had his own conversation, that is, memorized typical phrases. Many outstanding actors of the Comedy del Arte recorded such trial dialogues, dotted with witticisms and ridiculous dialectisms. So known are the dialogues of Captain, written by the actor Andreini, his wife’s love dialogues, etc. Comedy del arte was played, as in general Italian comedies of the XVI century, in masks: the comic grimace remained on stage all the time alone, but the dialogue was especially alive and natural.

Replicas were quickly submitted by skillful actors, and the tone in them was always sustained, as the actor spoke his own words. The scene never changed and represented the square, as in the Roman comedians; but sometimes they also played on the stage with curtains instead of wings. The innovation made by comedy del arte is to allow women to play female roles.

The success of the impromptu comedies del arte was so great that the authors of the classic comedies of the middle of the 16th century often complain about the public’s coldness towards their plays, because they little deduce characters with their coarse jokes. From northern Italy comedy del arte spread to France.

Comedies del arte lasted until the 18th century and only Goldoni, who, however, borrowed a lot from them, dealt them a decisive blow, developing in the public the taste for more real and correct ideas. From France in the XVII century, the Italian comedy del arte spread in Germany.

At the beginning of the 18th century, the comedy dell’arte’s productions were reworked by Joseph Stranitzky from Silesia into the German mode. The Harlequin type was converted to Hansvurst, who had long amused the Germans with his amusing antics. From the comedies of the comedies del arte are known Scala, Locatelli, Biancaleley, Armoni and Valerini, a man of well-educated and not bad poet, and Bernardino Lombardi, who wrote “L’alchimista”, an original play far superior to others in talent.