Home ⇒ 🎨Malevich Kazimir ⇒ The head of a peasant by Kazimir Malevich 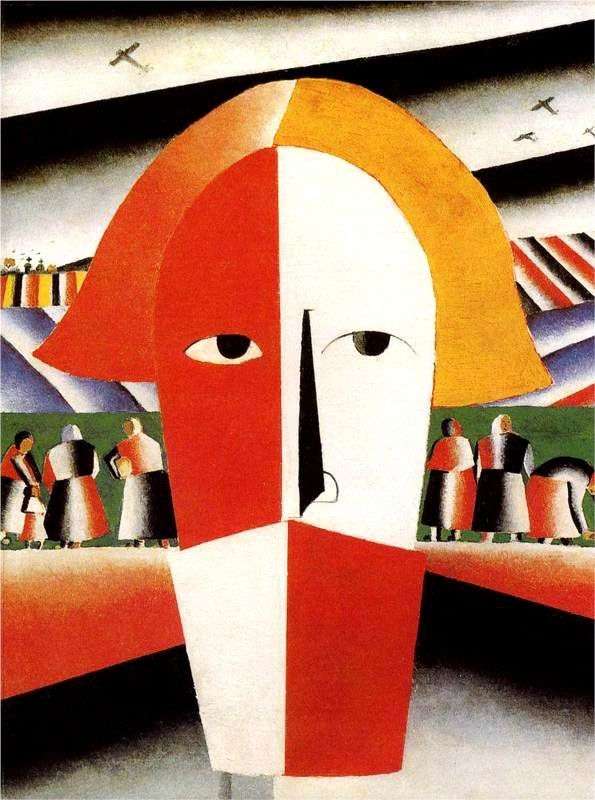 In 1929, K. Malevich was 50 years old, he lived a long creative life, tasted all the troubled times of the first years of Soviet power. In his paintings, figures of people reappear in this period. He himself calls this approach supranaturalism. He is still to the division of the world into simple geometric shapes, and the color conveys not the external life of the characters, but their inner essence.

Who is this significant person in the picture? Perhaps this image of a person as a concept, or a portrait of a contemporary, or a self-portrait? In any case, I would like to characterize him with such words as strong, enduring, creative.

In the picture there are many different diagonals. They and small figures of peasants of the second plan emphasize the majestic stillness of the main figure. With their rhythms, they seem to push the figure forward. It seems that the person is becoming more and more and is moving directly towards the viewer. The only thing that leaves the character in the space of the canvas is a cross of two diagonals, lines of sight and lines of movement of the aircraft. Surprisingly, if there were no gray in the peasant’s right eye, the crosshair would not work!!

The main means of expression here are stain and color. It is interesting to consider the color range. If you take white as an image of eternal life, is red as an active, material life, and black as death, emptiness, destruction? Present in the picture and yellow – unearthly, spiritual, remove it and the image will lose its expressiveness, sonority, it will become tense. Green and blue play a minor role. Green is the color of rebirth to life, the color of peace, hope. The blue color here is close to purple, which emotionally gives it a hint of restraint, moderation, and also translates into a spiritual beginning.

Despite the seeming unusualness of the image of people by K. Malevich, the analogy of using color with traditional Russian art, for example, with icon painting and costume, suggests itself. Who can go beyond their material existence? Yes, there was a revolution, everything around was changing rapidly and the color vision of K. Malevich, most likely, was different, but the world in essence remained the same…

Let’s look at the picture from top to bottom: airplanes in the sky, most likely a symbol of war, they penetrate the wholeness of eternal life with black lines, bring chaos that stops at the figure of a peasant. Man is naturally mortal, but has an eternal nature and he is full of life, creates it here and now. Man, creating, overcomes chaos, he is great and he is one of many. Such a meaning is guessed in this expressive picture of Kazimir Malevich.