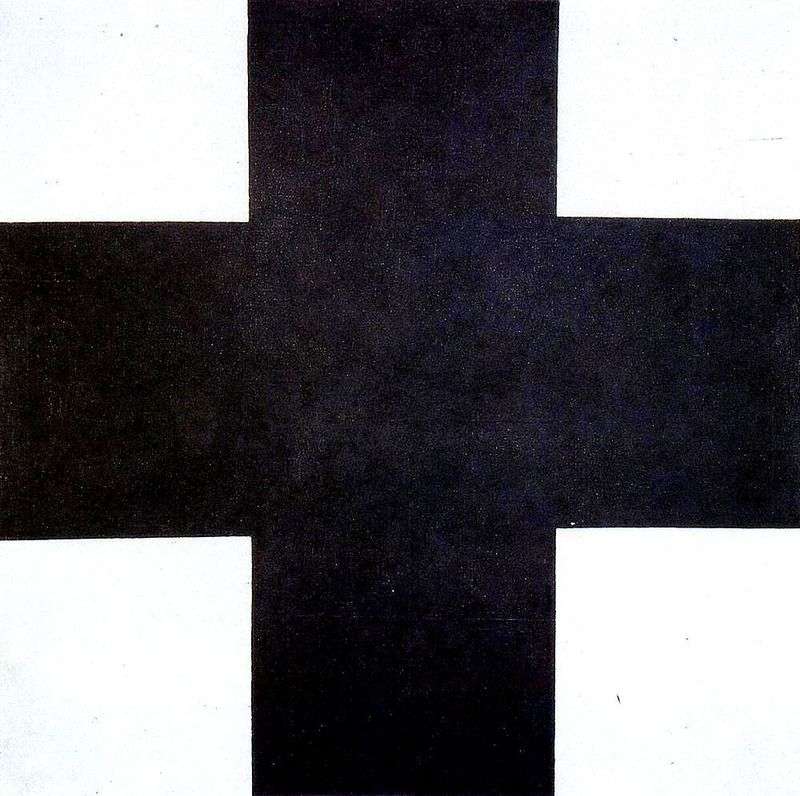 Malevich’s Suprematism is distinguished by a special love for simple geometric forms, the main of which, of course, is a square. He also allows a rectangle, a circle, a line and an ellipse. All figures are devoid of volume, color is conditional, there is no image attachment to real objects. Black, white, red and yellow are commonly used.

The cross, which we see, is made up of four squares that are on top of each other. In the middle they form another small square. Square canvas and the edges of the cross squares! Both the square and the cross are the oldest symbols. Square in many cultures means the earthly beginning and the Earth as a whole, the four sides of the world, the four elements and much more. It is a stable, stable form. The cross symbolized both fire and the unity of the spiritual and earthly. The vertical is the sky, the horizontal is the earth. At the intersection of these lines, in the fifth square, you can mentally place a person. In the pre-Christian era, the cross did not carry such a strong form of death as it is now, it was rather a guard sign.

Revolutionary society rejected religion. It seems natural in this case to refer to the pre-Christian, most ancient symbols. This happens unconsciously. It is necessary for a Man to designate his place in the world, to find support. It seems that we are creating our new art, unlike anything else, but everything new is based on what was previously, even if it denies.

What meaning the artist has put into his work is unknown. If we assume that emotionally black is peace, zero point, death, then white becomes activity, development, life. The cross touches the edges of the picture, it can be extended far beyond these edges. Emptiness seeks to capture the whole world, but it is limited by white square planes and the square format of the picture.

From this comes an interesting feeling of strength and dominance of the cross, but thanks to the format and the presence of white – peace and confidence appear. From life comes death, and then again – life. Very similar to the sign of infinity, the cosmogonic symbol showing the world known to man and determining his position in it.