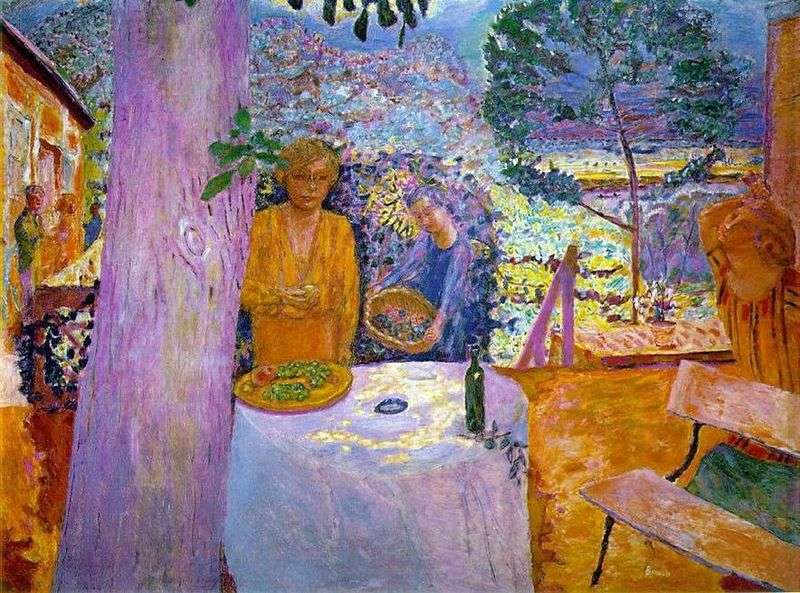 Bonnard always kept in his heart the devotion and love for Normandy, as evidenced by his landscapes dedicated to this northern region of France. Two works are monumental: “Terrace”, where most of the composition is dedicated to vegetation, depicted on the canvas randomly and subordinated to itself almost the entire plot, and “Terrace in Vernon” – a picture where people and nature occupy an equivalent position.

The last work, which was created almost twenty years, is especially mysterious. There are a lot of mystery and inconsistencies in it, and in many ways, the author suggests

that the viewer himself should look for answers to the questions. His Marta took an apple from a vase and holds the fruit in his hands, and this gesture can be connected either to Pomona or to the Mother of God of the human Eve. But what does it mean? The same mysteriousness is vested in the images of girls, one of which holds a basket with plums, and the other a tennis racket. Why did the author give a sports figure tennis player, whose body breathes energy and youth, the face of a mature woman who has seen much in her lifetime?

Although in both works there are decorative techniques that were used by Bonnard during his participation in the Nabi group, the atmosphere of the paintings is noticeably different. The use of the appropriate color scheme, as well as the technique of creating this work, made it possible to give the canvas a feeling of the hot French south.