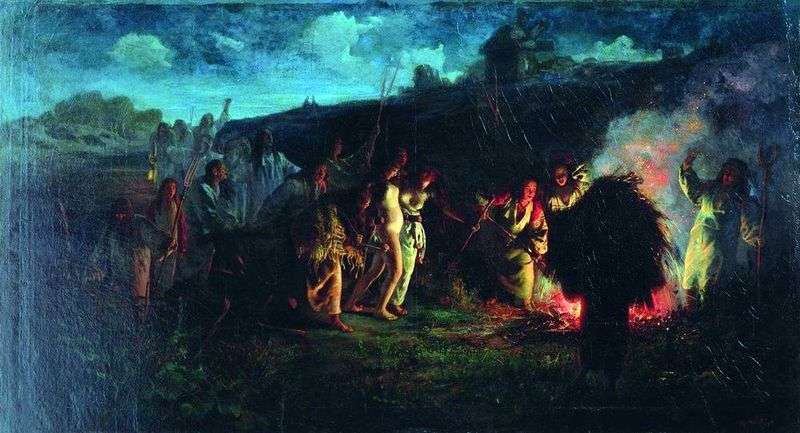 Gregory Myasoedov, as a man who deeply loved his homeland, studied the ancient customs of the pagan cult, fully believed in the miraculous power of rituals and spells. One of the brightest rites – plowing – the artist captured in the picture of the same name.

Wrapping is an ancient Slavic rite conducted by peasants in many parts of Russia. The pagans believed that this ritual was able to drive away or scare away the cow death – an evil creature that causes the death of cattle. Plowing was carried out exclusively by women: girls, unmarried, widows, old women. At this time, men were strictly

forbidden to step over the threshold of the hut.

At the first signs of the morale of animals, women gathered at midnight on the outskirts of the village, stripped to shirts or naked, distended their hair, armed themselves with pokers, grips, brooms, and other female household utensils. Having harnessed to a plow, they had to go around the village, plow it, leaving a deep groove that Cow death could not overcome. Pawing was accompanied by noise, din, songs, spells – the peasants believed that this would help intimidate the disease more.

Despite the importance of the ritual, his images are extremely rare. Slavs believed that no one should see him, except for women participating in plowing. Every man met was severely punished, and the animal was killed, because it could actually be not a cat or a dog, but the cow’s death itself, turning into them. Therefore, the painting by Myasoyedov is a unique canvas of its kind, which opened the secret of the most important pagan custom.

The artist with great skill managed to convey on canvas the mystical atmosphere of the ceremony, the emotions of women and their boundless faith in helping the invisible, but for centuries revered, higher powers. And each of them firmly knows that this night the hopes for a good outcome will surely come true.