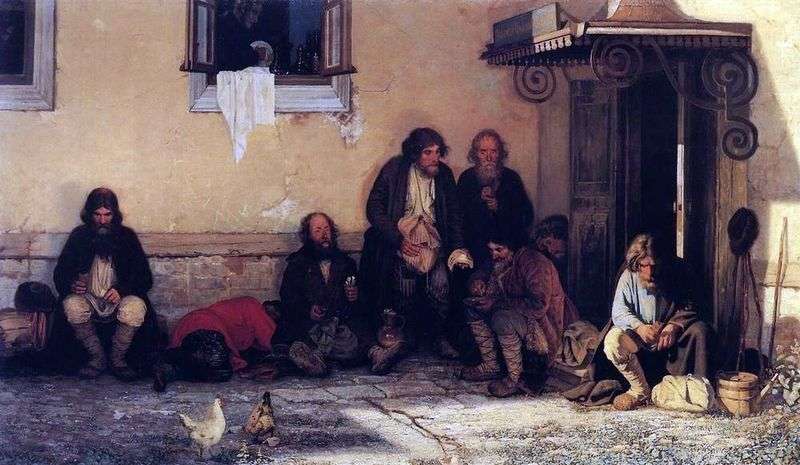 The painting was painted by G. G. Myasoedov in 1872. This work serves as a certain business card of the artist-itinerant.

The viewer sees in front of post-reform Russia. Only just began to appear local government bodies, which were called zemstvos. Peasants were elected here, but they did not have a high property qualification, so there were a small number of them. The artist sought to show the discrepancy between social situations.

The painting depicts a quiet provincial town. We can observe the building of the district council in the foreground. The whole house is not visible, only the bright wall of the Zemstvo government is depicted. Deputies, consisting of peasants, came out for lunch. Stuffy rooms do not attract them, besides the forced neighborhood with representatives of the highest class zemstvos does not please them. Therefore, they decided to dine in the fresh air.

The picture shows that someone has already had dinner and slumbers, and someone finishes his meager meal with simple village food. Someone eats dry bread, someone has bread with salt and a bunch of green onions.

The building of the county council also ended the lunch, this can be observed by the presence of wine bottles and by the actions of the waiter rearranging the dishes. The artist shows the contrast between poverty and wealth. The main characters of the picture – the peasants, received characteristic features: some are sharp-wittedness and slyness, others – a feeling of true spiritual nobility, and still others – an insult.