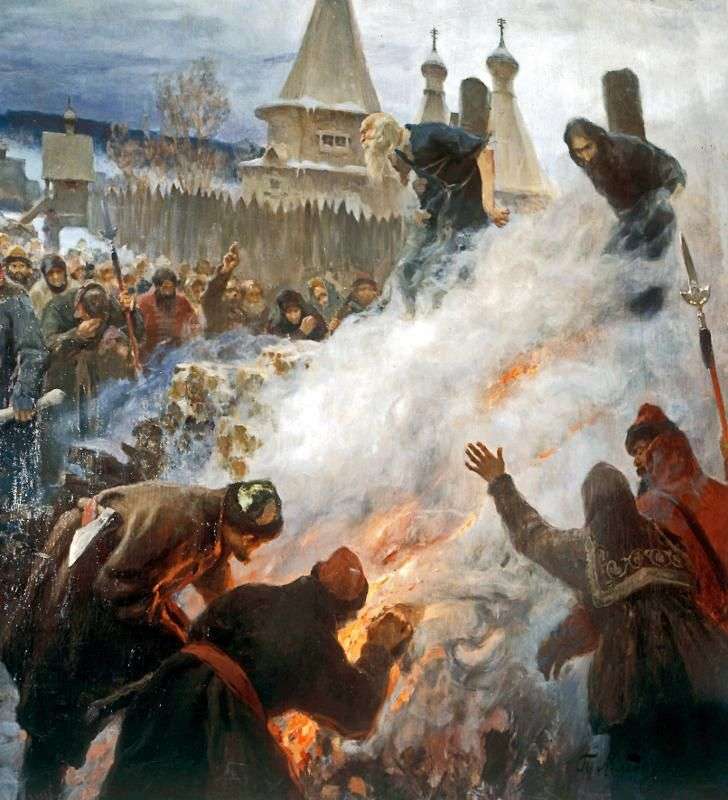 A terrible penalty was depicted by the artist. After many years of the most terrible prison, starvation, bullying, Avvakum, the archpriest, was sentenced to be burned alive at the stake. Pustozersk is a small northern town.

View on the penalty gathered residents of all classes. Flames are approaching the figures of the doomed. Heavy yellowish smoke is rising. Two are tied to the pillars. Protopop Avvakum, the ideologue of the split, the defender of the “old” faith, is a gray-haired old man, exhausted to the extreme, but not broken, full of a furious desire to defend the “true faith.” He peers into the crowd, wanting every witness to his death to look into his eyes before dying.

In the crowd stands a boyar in an embroidered gold coat, a clerk holding a royal decree in his hands, read shortly before the start of the execution, a priest who reads the departure prayer. All three represent power in the picture. The defenders of power – archers, distinguished by red caftans – guard the fire from the pressure of the crowd.

The people gathered on execution a raznolik. Those who sympathize with Habakkuk are immediately visible. But there are very few. The woman stretched out her hands to the condemned, the man raised his hand in a twofold, a symbol of the Old Believers. But the majority of those present are indifferent. The spear in the hands of the archer, the figures of the unfortunate on the fire, the church on the background of the execution, the crowd of onlookers – all these details give rise to associations with the crucifixion of Christ on Calvary.

The author as if tries to say that the true size of the tragedy captured will become clear much later. It is known that it was after the execution of Avvakum that the mass resettlement of the Old Believers-dissenters began outside of Russia.