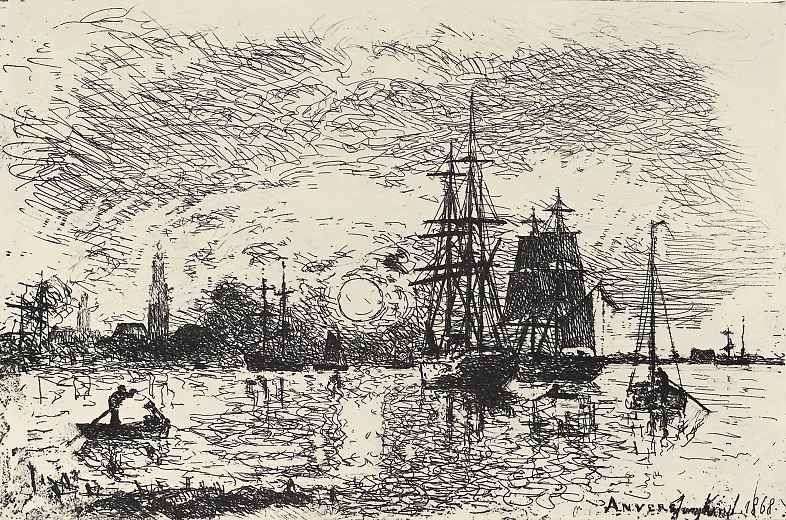 Dutch painter, graphic artist Johann Barthold Jongkind entered the history of 19th century art. as a master of lyrical landscapes, as one of the predecessors of impressionism. The artist’s paintings are executed in a free manner, in them there is noticeable a lively movement of the atmosphere, which evokes poetic sensations-reflections.

He studied painting in The Hague, worked in Holland and Belgium, but spent most of his creative life in France. In the 1860s he entered the “Aquaphorist Society”, founded in 1862 by the publisher A. Kandar, which played an important role in the development of the art of engraving and in its revival as a special genre of art. After the invention and distribution of photography in the 1850s, the engraving lost the role of reproduction technology inherent in it for several centuries.

However, in exchange for the creativity of a number of artists, among whom was Yongkind, engraving received the status of an independent art form. Iongkind became one of the first European artists who realized the wide possibilities of engraving. For sixteen years he created two dozen etchings, which were the first experience of Impressionism in engraving.

“Sunset in the Antwerp port” – one of the late works of the master, in which the artist combined a picturesque, open-air approach to solving the landscape with the technique of etching. Other famous works: “Harbor in Rotterdam.” 1856. The Municipal Museum, Amsterdam; “Bridge over the Canal”. 1873. Etching.