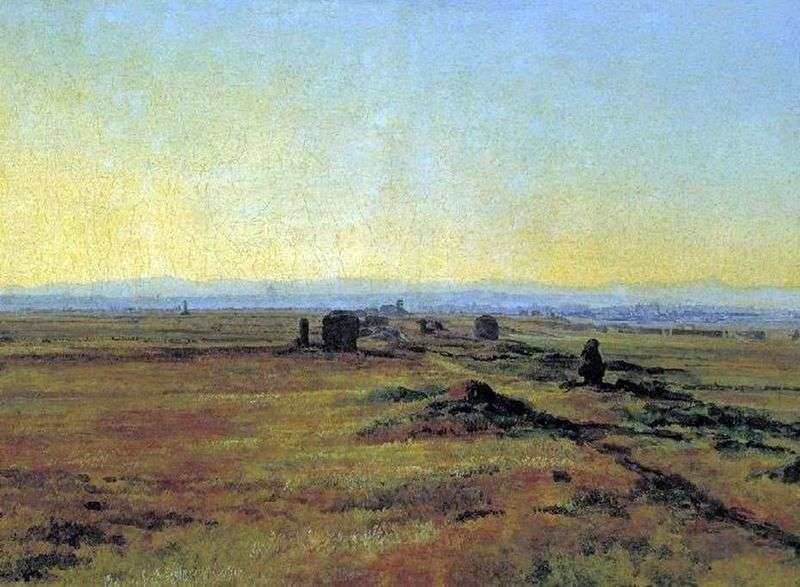 Ivanov carefully peered into the landscapes of Italy – the cradle of European civilization. Here, not only every stone, but the earth itself is a witness of history. Here is the Appian Way, which was laid by the ancient Romans in 312 BC. e. Like the wrinkles on the old man’s face, it bears traces of past times and symbolizes eternity. The prototype of the image of the wanderer, or traveler, depicted in the picture, was Ivanov himself. He observes what is happening impartially, as if from the side, although located in the center of the canvas, directly under the hands of John the Baptist. An observer, a witness, but not a participant in events – such an artist sees his role.

Ivanov did not depict the Holy Spirit in the form of a dove or a shining cloud above the head of Christ, like other artists in similar scenes. In his work, the miracle of the Epiphany takes place in the minds and souls of people, so there is no action, the characters in the picture are frozen in eloquent poses. Ivanov is known mainly as the author of one painting – “The Phenomena of Christ to the People.” Twenty years the master worked on this work.

Contemporaries considered him an impractical dreamer: he did not want to be distracted from his big picture and write for popular popular scenes. Shortly before his death, in the spring of 1858, he brought the painting to St. Petersburg. Recognition somewhat belatedly: Ivanov did not have direct students, but Russian artists of subsequent generations differently refracted his ideas in his work. One of the best and most characteristic examples of landscape painting by Ivanov is a large, carefully designed sketch “Appian Way at the Sunset”.

The artist depicted here the endless desert plain of Campagna; Among the reddish-brown grass scorched by the sun, the barely noticeable road that leads to Rome is winding. Rare hills, trees and ruins of ancient buildings are scattered here and there along this vast space. Silhouettes of urban buildings are barely visible on the far horizon, where the distant mountains are blue.

A model description of the landscape of Campagna exemplary in its classical accuracy was made by one of Ivanov’s older contemporaries: “There is nothing more beautiful than the lines of this horizon, than the gradual elevation of plans and closing all the thin, running outlines of mountains… The special haze enveloping the distance, softens all forms and takes away from them that which might seem too sharp and too angular.

There are never dark and heavy shadows. Neither in the rocks nor in the foliage of trees is there such dark masses in which there would not be a gentle light. A surprisingly harmonious tone connects the earth, water, the sky; all surfaces, due to this connexion of shades, pass one into another, and one can not determine where one color ends and where the other ends. “Ivanov, with astonishing vigilance, caught the character of the Roman landscape and managed to convey his stern grandeur and original beauty with the means of his painting. recreation of nature did not exhaust the tasks of Ivanov, he aspired to be not only a faithful nature, but also a new expressive.

At the heart of his sketch is a deep ideological design, to which the whole complex, consistently developed system of artistic techniques is subordinated. With the help of a realistic generalization of nature, Ivanov created here what many generations of academic masters sought; “Appian Way” has become a truly historic landscape, full of sublime poetry and yet a lively, vibrant and deep lyrical feeling.