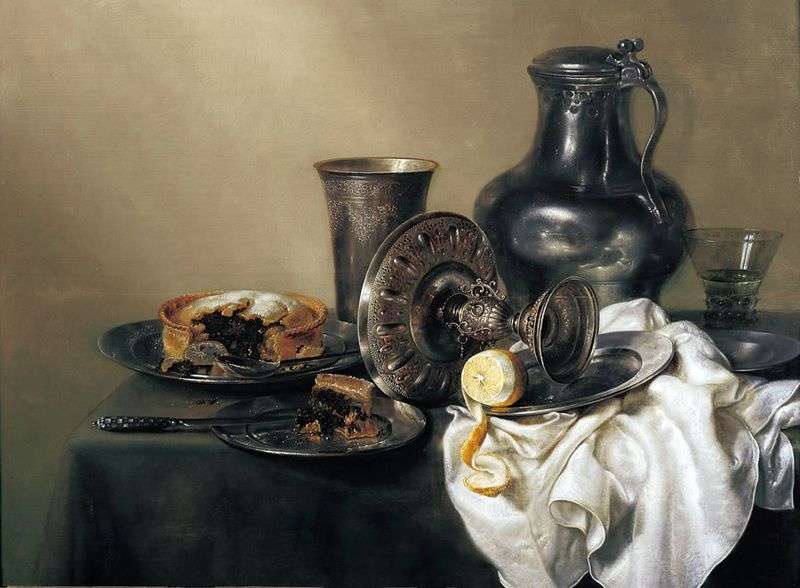 Willem Klas Heada worked in Haarlem. His career as a painter, he began with paintings on religious subjects and portraits. Later, the artist began to paint only still lifes. They were highly valued by contemporaries, the master was popular, had many students and followers. The first known still-life of the artist was performed in the genre of Vapnaz, where the objects had a special symbolic meaning. However, the main things in the creativity of Heda were the so-called “breakfasts” – still lifes with dishes covered with household utensils, with a neutral background, soft lighting, restrained colors

and subtle gradations of light.

Heda also liked to write silver bowls with flickering highlights, goblets made of Venetian glass, mother-of-pearl shells. The artist almost always used the same motives in his works, but changing the composition, he created original compositions representing a new look at the usual objects. His still lifes are characterized by amazing accuracy in the transfer of objects and at the same time mysterious poetry, creating a romantic sense of mystery. Other famous works: “Breakfast with a lobster.” 1648. The Hermitage, St. Petersburg; “Breakfast”. 1652. The Hermitage, St. Petersburg; “Breakfast with blackberry pie”. 1631. Picture gallery, Dresden; “Ham and silver dishes.” 1649. The Pushkin Museum. A. S. Pushkin, Moscow.