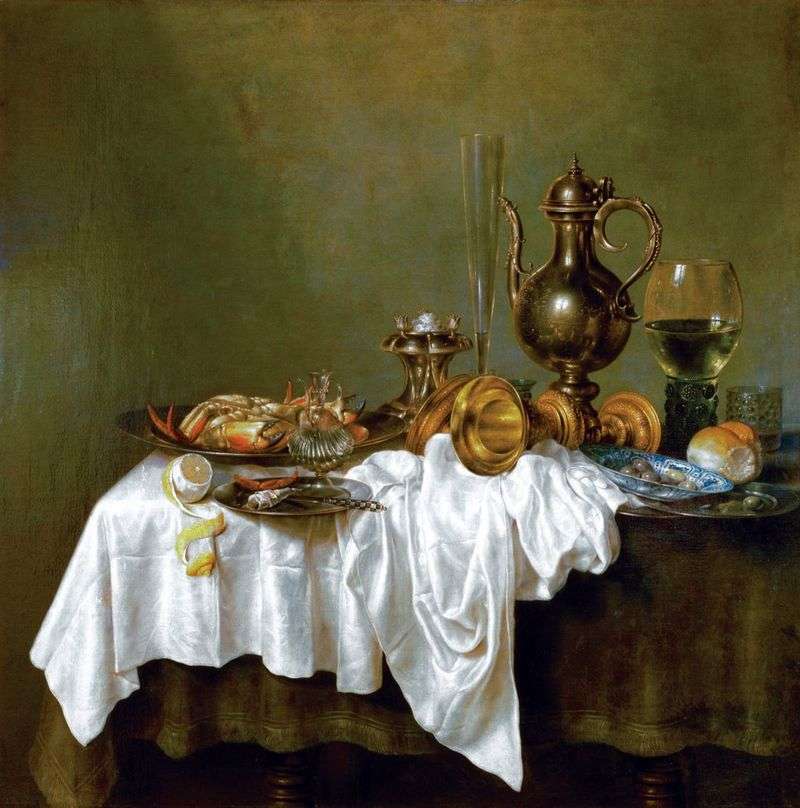 Extremely widespread in the Dutch art of the XVII century received a still life. The masters of Dutch realism felt a special inclination to depict the “life” of things. Throughout the 17th century, the still life in Holland undergoes a noticeable evolution: from the humble depiction of the surrounding objects, it turns into a magnificent spectacle. “Breakfast with crab” Khedy refers to the period of the heyday of this genre. It belongs to the type of so-called “breakfasts”.

The set of items that were part of this type of still life, eventually acquired certain certainty: glasses or wine glasses with wine, jugs, plates with sneddy. “Breakfasts” always bear the traces of the invisible presence of a man: the wine is poured into a glass, but it is inappropriately, the lemon is half-cleaned, the napkin is crumpled. This direct sensation of life singled out “breakfasts” from the mass of other still lifes, making them especially popular. Another feature is the skill with which the artist depicts objects. Heda conveys the fineness of glass and crystal, the brilliance of silver and gilded cups, the texture of the starched tablecloth and the porous peel of lemon. It is quite obvious that Heda’s still life reflects the life of a well-off person.

The painting shows luxury items – crystal, silver, expensive overseas dishes. The intentional disorder, designed to give the impression of greater “liveliness,” is deceptive. Still life is built very strictly – the table line and the cups and glasses standing on it form a clear system of contours and verticals – the composition of it is indestructible. The color in the still life is subordinate to the unity of the brownish-gray tonality, even the red crab and green olives should sacrifice their natural color for this purpose.