Home ⇒ 🎨Greco El ⇒ The Adoration of the Shepherds by El Greco 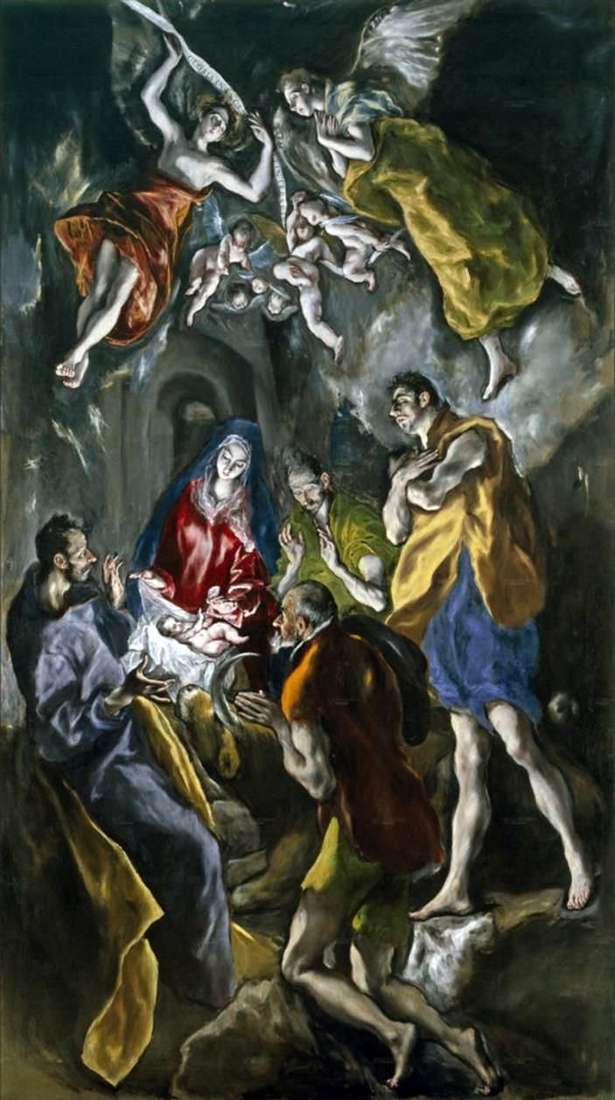 The worship of the shepherds is one of the episodes of the birth of Jesus Christ, a description of which was presented in the New Testament. The shepherds were first mentioned in the scriptures when an angel appeared to them and told about the birth of a savior. The angel gives a sign to the shepherds, who directs them to Bethlehem in search of that very baby. After much searching, the shepherds nevertheless reached the manger of Jesus and told his mother about their meeting with the angel. The Infant Christ became the hope for all mankind, therefore the shepherds fell on his knees before him, hoping for salvation.

The canvas “Adoration of the Shepherds”, written by the famous Spanish artist El Greco in 1612, is part of a series of paintings devoted to biblical subjects. This picture refers to the late period of the artist’s work, the distinctive features of which are gloomy colors, mystery and a sense of hopelessness.

In his works of this period, the images of people acquire more and more unrealistic features: the proportions of human bodies are greatly distorted and acquire frightening unhealthy outlines that sometimes resemble flames that burst from the fire. Strongly elongated figures of people seem to soar above the earth, symbolizing the spiritual fusion of man with God. The clothes of the mystical heroes seem to exist separately from the masters, they always remain sealed in an unusual movement.

Due to different lighting, the picture is divided into two parts. The brightest part, of course, is the bed of Christ. The Virgin Mary is next to her son, lying on a snow-white sheet. The baby is surrounded by figures of shepherds, whose faces are lightly lit by light emanating from unknown sources. The second, darker part of the picture depicts angels hanging in the air and watching the newborn with trembling eyes. There is an opinion that the shepherd, who is in the foreground of the canvas, is a self-portrait of Greco.

The color scale of the picture makes it gloomy and mysterious, blurring the boundaries between reality and imagination. The mysterious light coming from the infant of Christ makes the figures of people vague, which brings mysticism to the canvas.

El Greco wrote several canvases on this biblical story, but this work is his favorite and last. He created it specifically for the monastery of Santo Domingo el Antigu, where his grave is. This painting for a long time served as a decoration for the altar of the gravestone of El Greco.