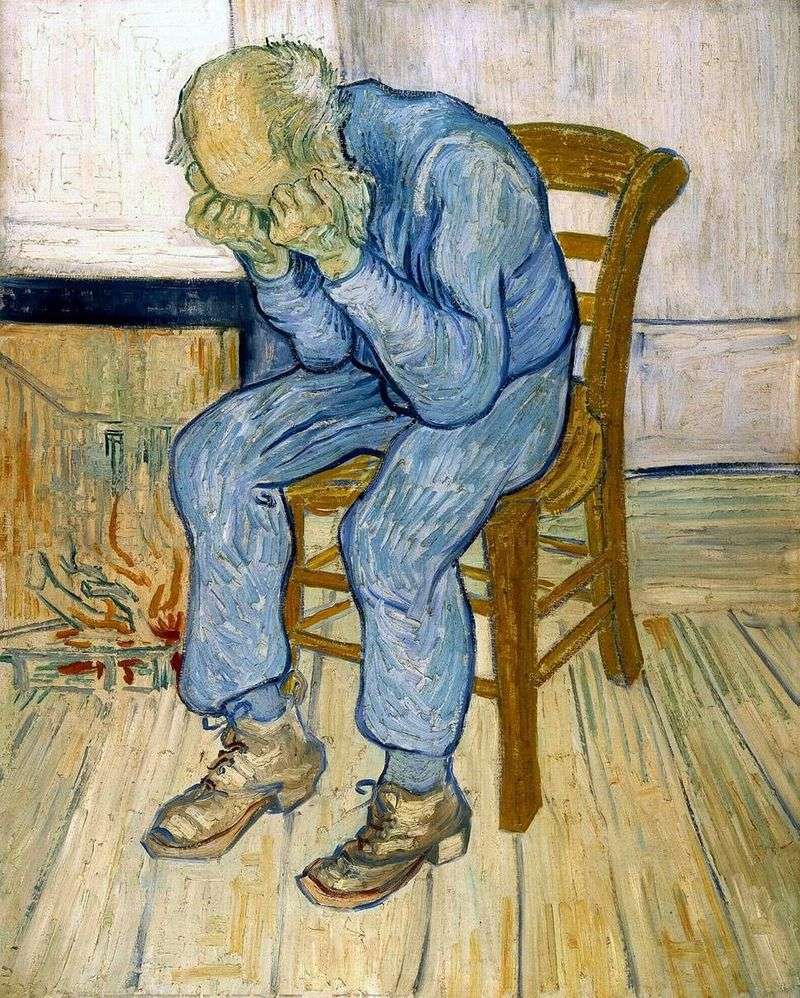 Vincent van Gogh devoted many of his works to the theme of life, he tried to show all of its fragility and fragility, but at the same time an extraordinary strength. The artist was not the most carefree and happy life, he went through many difficulties and was ruined by mental illness, but he never gave up, and even on the worst days he did not give up and poured all his experiences into his pictures. He showed in the paintings a variety of feelings, hiding them behind the most common things, for example, for sunflowers.

The painting was written in 1890, the same year Vincent Van Gogh passed away. In this picture, a close-up depicts a man, such paintings were rare for this artist, he painted portraits very badly and this strongly affected his self-esteem. The painting depicts an old feeble peasant, whom the artist met in Etten.

The old man sits on a chair next to the fireplace. The pose in which he sits shows disappointment and bitterness. He hunched over, covered his face with his hands, he was broken. Probably, there is some great sadness on his soul. He is the center of the whole picture, the rest of the things are sketched and sketchy. The fire in the fireplace is depicted by quick strokes, the artist did not at all seek to make it realistic. The chair on which the old man sits is very weak, it seems that he is about to break down, and the old man will collapse to the floor.

Van Gogh very clearly depicted despair, highlighted important details. The old man’s shoes look very old, they saw a lot of roads and dirt, a man worked hard for his life. His suit is already old and worn out. The man is already very old, he has gray, thinning hair, a long beard. This man lived for many years, but for such a long life he saw very little joy. He devoted his life to work in order to survive.

Despite the sad overtones, the picture is very light. Perhaps the artist concealed in this canvas his hope that the troubles will recede and a bright band will appear in his life.