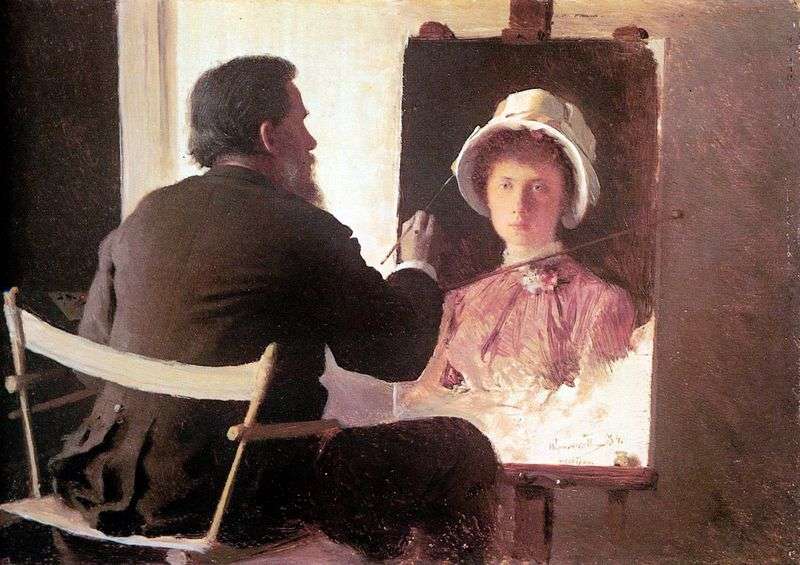 This painting is a self-portrait, which was written in 1884. This was the last work of the artist in this genre, written in the south of France, on the shores of the Azure Sea. It was there that Doctor Botkin recommended to go to the artist. Kramskoy was ill and forced to be treated, in his spare time he managed to draw with his daughter.

The picture enchants us with its warm and bright mood. It depicts the figure of an aging artist who paints a portrait of his daughter, Kramskoy, depicted himself sitting on the floor of a turn. In the portrait, which the artist draws an image of a young girl in a white hat.

The portrait is not finished yet, which creates a feeling of naturalness.

The picture is filled not only with kindness, there is still tenderness and love in it, it is thanks to these feelings that the picture is filled with life. Kramskoy, portraying herself in the movement, gives us the opportunity to become observers of the process, exposing her personal life. The image of the daughter is depicted as soft and young.

The artist in my opinion opposes himself, wise man’s life experience and the image of his daughter, young, young, ready for ridiculous actions. Like a thread connects the present and the future. His work, he shows us that the youth loved him, and he willingly tried to overeat her life experience.

With what love, giving all his soul and all himself, the artist, despite his illness, paints a portrait of his daughter. I think they were connected by a great father’s love. Most likely they liked to walk with their daughter in the morning in the garden, or talk over a cup of tea. Such a talented father could not have been a stupid daughter. She must love him to the point of unconsciousness. And consults him on any trifles. He does not even scold her, and does not bring up morals, their relationship develops on trust to each other and the child’s love for the parent.