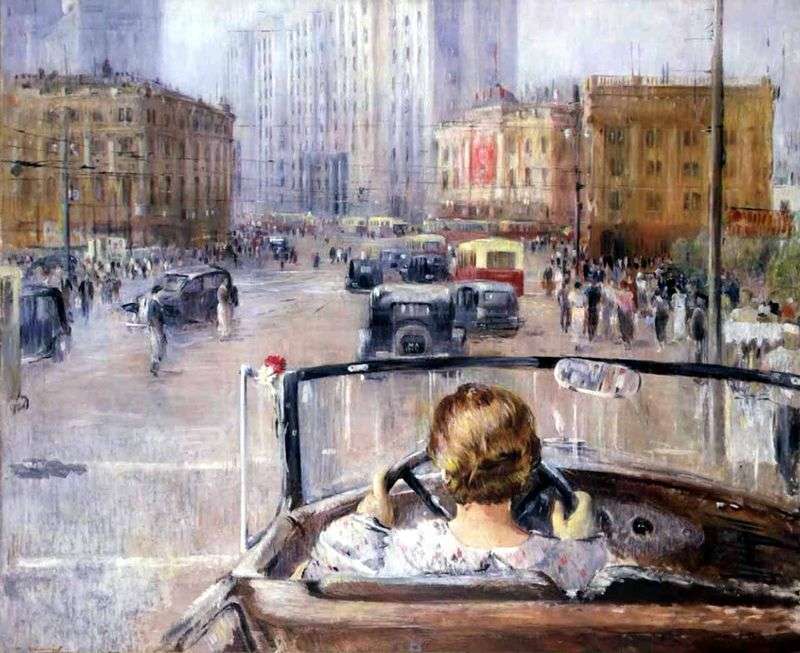 The famous Soviet artist Pimenov, Yuri Ivanovich, created a whole series of works on Moscow subjects. Most of all from this series I was struck by the picture “New Moscow”. In it, the author showed Sverdlov Square, which is practically the center of the city.

In the distance, large houses and buildings are visible in the picture. In them you can see the silhouettes of the famous House of Unions and the hotel “Moscow”. The foreground is attracted by the image of the cabriolet cab. A woman is driving. We only see her from the back. She is wearing a light dress and a short haircut. Further along the wide road there are still a lot of cars and buses. People are bustling on both sides of the road. Someone goes along the road, and someone needs to go to the other side.

The first impression that I had, only I looked at the picture, is the fact that it is raining. Everything is so blurred, fuzzy, a lot of vertical lines and a mirror shine of asphalt. And only when I looked narrowly at the lot and open convertible and completely dry woman, I realized that I was mistaken.

The author simply portrayed his masterpiece in a non-inspired sense. He used almost transparent shades of colors, mixing up cold and warm tones. This gives the picture a harmonious combination. A vague images and slightly blurred silhouettes give a sense of timelessness and lightness.