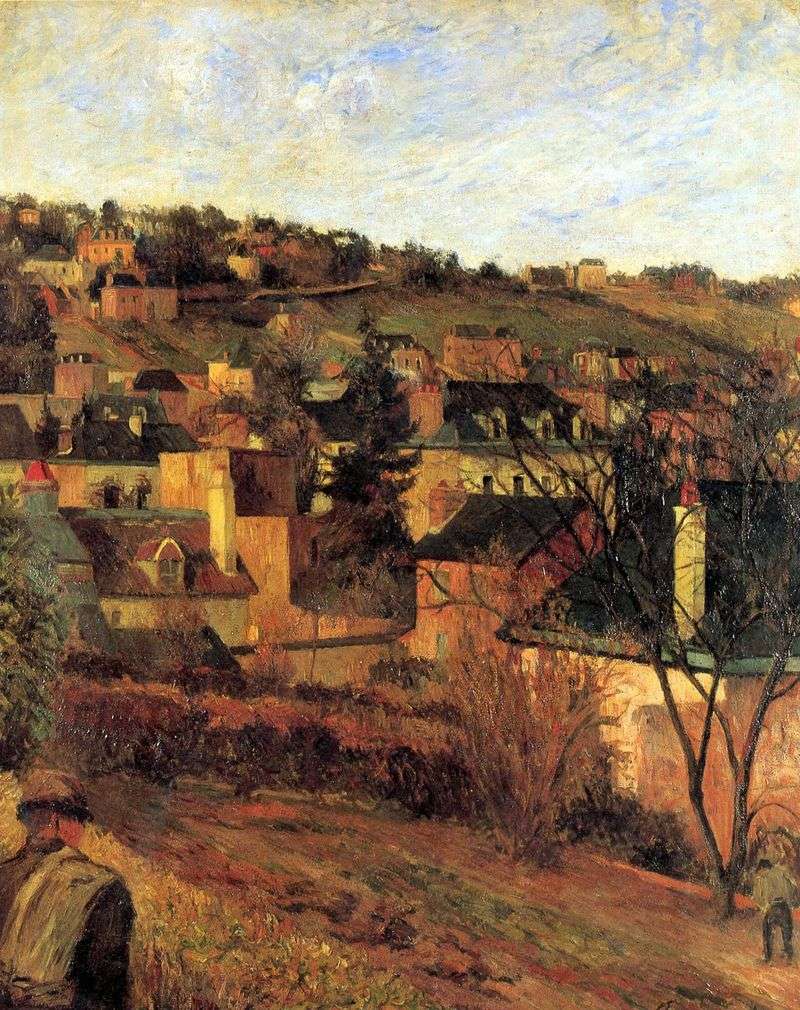 The “Blue Roofs near Rouen”, written by Paul Gauguin in 1884, has a number of features characteristic of the art of impressionism. At the same time, the picture shows persistent post-impressionist tendencies.

Landscape “Blue Roofs near Rouen” – is a dense, dense in terms of fine images of the canvas. The picture plane is full, the graphic series is even overloaded to some extent. The picture lacks air, space.

The image of closely-spaced houses gives rise to a sense of inaccessibility and peace, and at the same time, isolation and seclusion. To paint the roofs, the artist

uses a complex blue color, thereby integrating this cluster of buildings near Rouen into something whole and significant.

The artist recreates complex light-shadow relationships through the selection of a unique palette for his canvas.

The picture is characterized by an interesting foreshortening and an original compositional vision of the artist. Numerous, different kinds of houses rise at times cumbersome tiers above the viewer. Meanwhile, such a heap of scattered buildings can not be called one-type, boring, ordinary.

On the contrary, the prosaic image of houses pleasantly surprises with a variety of shades and textures. “Skunkness” of the picture retains a sense of ornamentality of the image, when the elements are closely located to each other, being at the same time a clearly defined, but hidden to the time symbol. So in this case, the landscape is symbolic, and not simply closed in itself. And even if there is no dynamics in the literal sense of the word, nevertheless, the canvas has an idea and has symbolic energy.

The landscape shows us the autumn colors, complex shades. Pretty warm color is counterbalanced by the cold color of the sky and roofs. The space of the sky is filled with white intermittent clouds, dropping additional shadows and obscuring the landscape, making it more pronounced and contrasting.

The picture is more like a sketch, podmalevok, one of the possible images, as evidenced by the lack of detailed drawing, strict contour lines, roughness and nervousness of the stroke.

The landscape is extremely static, but the dynamics of the canvas is given by the figures of people in the lower part of the canvas. The unusual arrangement of these figures enlivens the landscape image, introduces an element of randomness and some chaos, which in life is so often. From this the canvas ceases to be a dead picture plane, and begins to breathe in time with the surrounding reality.