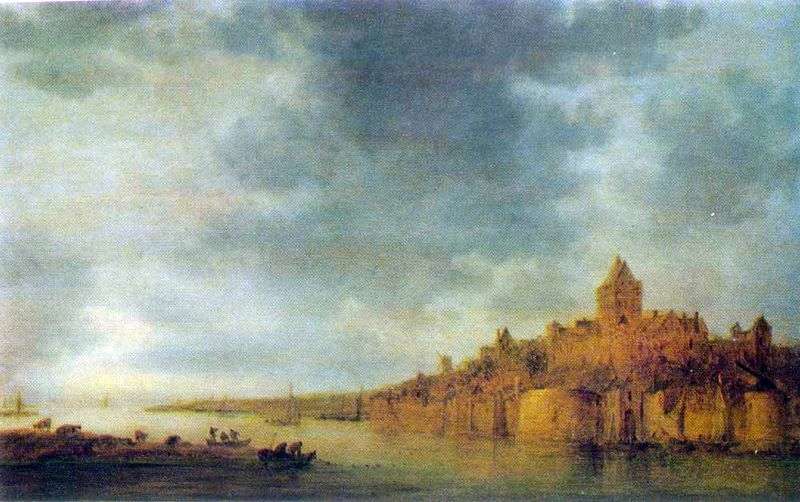 This picture shows a medieval city under a low and gloomy sky, located on the river bank. It’s just a landscape, but somehow at the sight of the canvas there is a feeling that you know about Holland almost everything. It’s just a kind of corner of someone else’s land, but where does the feeling of love for him come from?

The name of the author of the painting is Jan van Goyen, whose work played a big role in the development of Dutch painting of the 17th century. Van Goyen is considered the founder of the Dutch realistic landscape, and it is in his paintings that those genre traditions are laid that will determine the further evolution of this kind of fine art. Therefore, we can rightly say that in the works of Van Guyen the landscape finally took shape as an independent genre.

Interest van Goyen to reflect on the canvas features of his native nature woke up early. While still a student of E. van de Velde, under whose influence, in fact, his creative manner developed, van Goyen begins to work with the possibilities of this genre. At that time he is doing only light sketches and sketches, the themes vary, but the artist’s brush already feels something from the future master of landscapes. Such was the school of van Goyen the artist.

In the early works of van Goyen attracts some large, significant object, which is placed by the artist in the foreground. It allows you to detain the attention of the viewer, but there is still no color unity. Above the painter is the framework of previous experiences, but he is already on his way to liberation from them. An example is the picture “Hay mowing”, written in 1630. Further evolution of Van Goyen is marked by the abandonment of these strong points and switching attention to the transfer of the atmosphere, the gradation of lighting, the use of color consonance. Classical vision of the principles of the Dutch landscape van Goyen achieved in his work on the “Vaal River from Nijmegen,” created nineteen years after the “Senokos”.

The Dutch landscape is not a desire to capture a cosmically integral picture of nature. This landscape is deeply national, with views of specific terrain. A clear day or cloudy sky, a mill on the river bank or a fortress wall – everything became for artists an inspiration transmitted with a deep sense of love and sincere affection. The internal attitude to the object was so strong at work that the reflection on the canvas was noticeable even to the inexperienced eye. Do not deprived of this and the work of van Goyen, why and this inexplicably warm feeling is born when looking at the “View of the river Vaal at Nijmegen.”

Perhaps, in the “View of the Vaal River” the master for the first time deviates from the traditional method of constructing space. Before van Goyen, the illusion of depth was made to be created by means of a rocking arrangement of objects with receding plans. The compositional center in this case must be located strictly in the middle. Van Goyen finds another way. He builds the perspective with the help of a diagonal composition, placing the smallest details on the left background, and the most significant object is on the right front, where the “reference point” is located, the place from where all the movement on the canvas takes place.

Creation of a visual effect of depth is also a gradual decrease in the sharpness of the image of objects, so that on the far background there is clearly an air haze. The sensation of air is one of Van Goyen’s important achievements. Thinly using the gradation of colors, the artist, moving deeper, reduces the distinctness and sonority of the tones, filling the landscape with air freedom, which miraculously recreates the moisture of river fumes, the ease of the fogging mist enveloping the objects.

To convey the flat nature of the terrain, van Goyen uses a low horizon, leaving virtually all the place on the canvas with a gloomy sky with heavy clouds. The sky plays almost the leading role here. The very same vision of the heavenly element is the discovery of Dutch painting, and van Goyen brilliantly applies a known experience to influence the viewer. Tightened by clouds, it changes, and this movement can be clearly perceived, and the low horizon helps create a feeling of extraordinary height. Using grayish-silvery tones, van Goyen puts all the objects in a single light-and-air environment, where the close and scattered parts in each other give birth to a unique integrity.