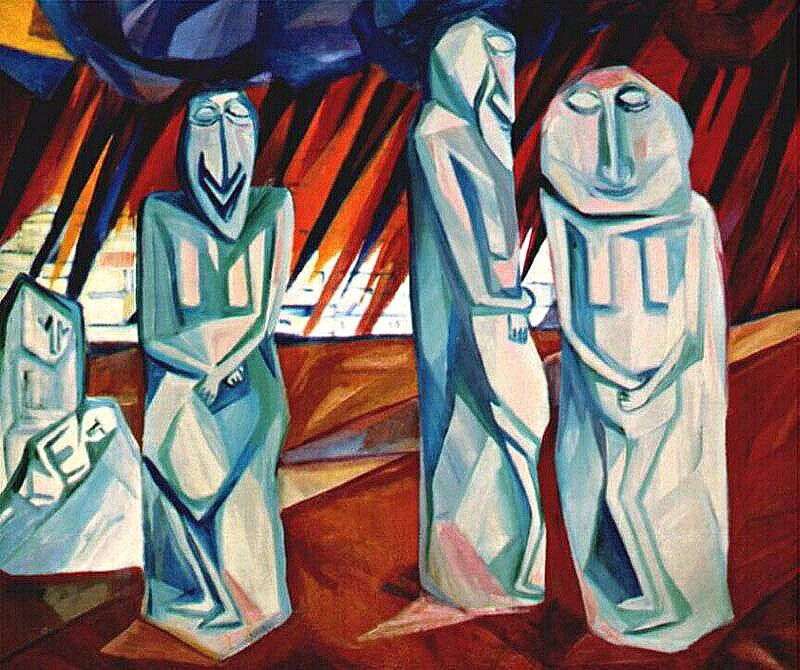 The picture is characterized by great architectonics, complexity and multi-figure composition, a variety of angles, freedom in the construction of forms.

Using the technique of “a picturesque story,” Goncharova takes the biblical legend of Lot for the basis of the composition, but retells it with a retreat. The point of attraction for the cubistic interpretation is the moment when a human figure turns into a salt crystal against the background of the city being plunged. In Goncharov’s interpretation, all the participants in the scene turned into pillars – Lot, and his wife, and daughters, even their future children.

Many picturesque-plastic techniques flow from the previous picture “God of fertility”, namely, the treatment of the face, especially the double eye stroke, the eyebrow line that goes over into the nose, the head planted on the shoulders, thin arms and legs, rigid deformations of proportions, coal forms.

In the picturesque development of the surface, a new element is also planned – in the form of a “swallowtail” in the image of Lot. Here, it has not yet been adequately revealed either functionally or picturesquely, but will find its place in subsequent works.