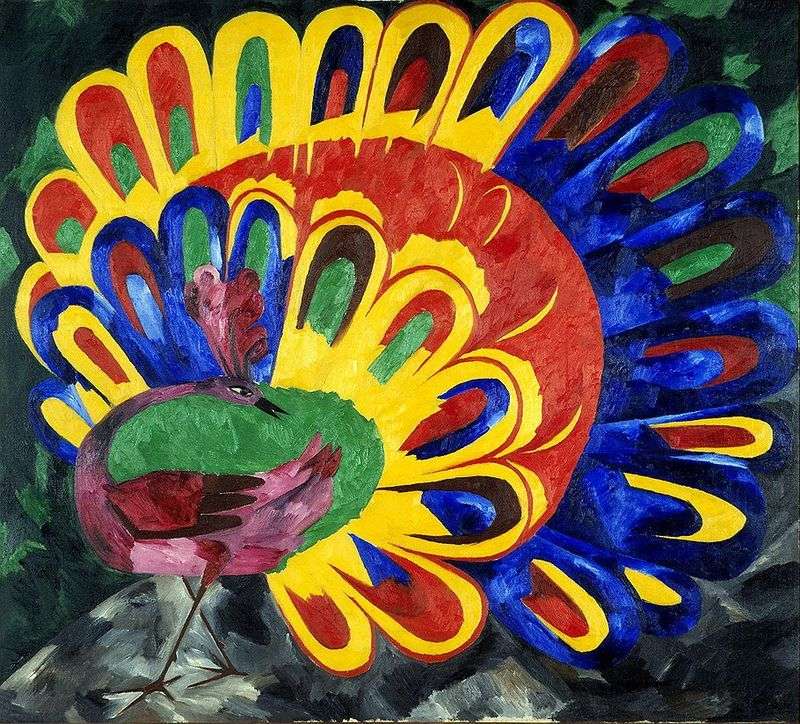 The artist depicted the same peacock in 10 styles. A whole series was created under the title “Artistic possibilities about the peacock”. He was her symbol, a symbol of her art.

Peacock was close to Goncharova, because it is a deep holistic symbol. For example, in Roman art, he could denote the triumph of the emperor’s daughters. In the East, the peacock was an expression of the soul, which derived its strength from the principles of unity. In Christianity, a peacock was considered an image of faith in immortality and resurrection, and its plumage from “a thousand eyes” pointed to omniscience. Multicolored plumage hinted at the beauty of the world and the very act of creation in Islam – the symbol of the universe).

Peacock can be perceived as a sign of the unity of Being. Its symbolism is associated with those ancient syncretic cultures, which the artist so fell in love with. In the Egyptian version, the head and neck of the peacock are depicted in profile, and the tail, according to the canons of Egyptian art, is deployed frontally. At the same time, he seemed to spread out over the dark background, standing out with his unique plumage. It is as if covered not with feathers, but with bright colors, acting on the viewer more physiologically.

In bright colors, a truly primordial energy is embodied, reminiscent of similar incarnations of human emotions in Russian folk art. Presumably in this picture reflected the enthusiasm of the young artist paintings of Gauguin with their colorful exotics and freedom of natural life.