Home ⇒ 🎨Becklin Arnold ⇒ The Island of the Dead by Arnold Becklin 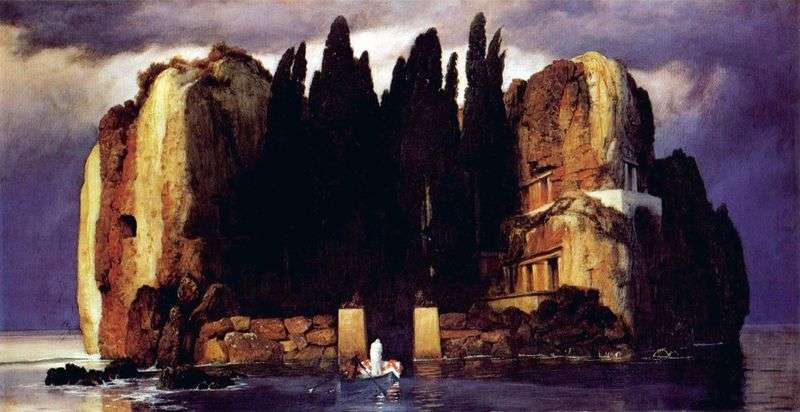 At the heart of the plot of the picture is the ancient myth that the souls of the heroes and favorites of the gods find the last shelter on a secluded island. The island of the dead is washed by the desert mirror waters of the underground river Acheron, through which the boatman Charon sends the souls of the dead.

Historians of art, of course, wondered about which island inspired Becklin. Sheer bright rocks “Islands of the Dead” are very reminiscent of the landscapes of the volcanic Pontine Islands and the reefs of Faralioni near the coast of Capri, which Becklin could see while traveling to Naples.

One can not help recalling the island-cemetery of San Michele near Venice, where the bodies of the deceased are ferried in gondolas and where the same dark, “mourning cypresses” rest in the sky, as in the picture of Becklin. These trees symbolizing eternal life are traditionally planted in Italy in cemeteries, in monasteries and near churches.

But whatever island Beklin inspired, he managed to abandon nature and convey the main thing – this island with the crypts carved into the rocks and the small marina does not belong to earthly life, it is in a different, inaccessible living space. A boat with a carrier dressed in a shroud figure and a sarcophagus does not violate the slip of the silence of this ghostly world, melancholic and devoid of live breath, but in its own way beautiful.