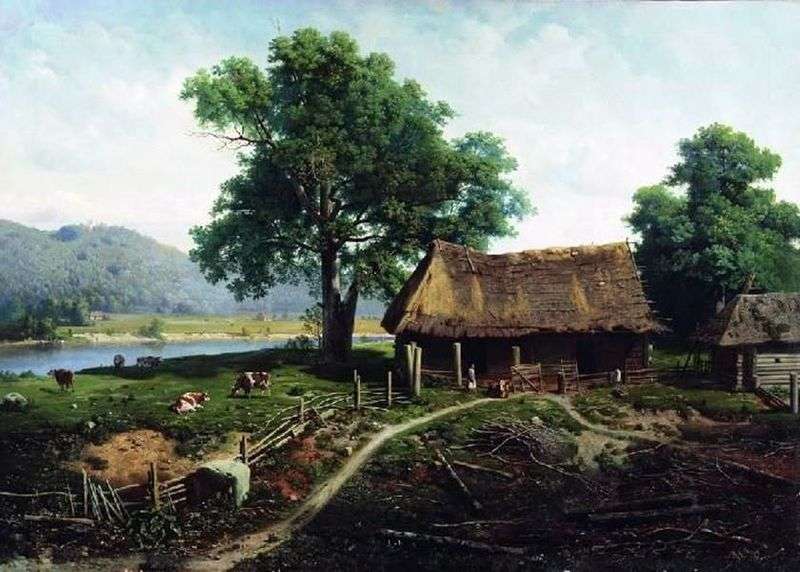 Almost 70 years of his stay in Tomsk this canvas existed under the conditional name “Landscape” and was attributed to a brush by an unknown German artist of the second half of the 19th century. Specification of the original name and authorship was hampered by the mysterious appearance of the picture in Tomsk. Her biography was not traced through the archival documents of the museum. I solved the mystery of the picture in 1996.

Engaged in a scientific description of a small etude by M. K. Klodt, the museum found in the old reference literature reproducing the picture of M. K. Klodt “View

on the island of Valaam” in 1857, absolutely identical to “Landscape.” Further research returned the picture of its glorious history. “View of the island of Valaam” was written during the years of apprenticeship as the future pillar of Peredvizhinism, all its creativity asserted along with I. I. Shishkin an “objective” direction in the national Russian landscape. On Valaam, which turned into an academic “workshop in the open air,” Russian artists created a variety of landscapes, as the image of the nature of the island was part of the training program for landscape painters.

Artists of those years attracted on Valaam the intricate labyrinths of bays, bays, reliefs of rocky coasts and windbreaks, which Mikhail Klodt also paid tribute to the landscape in 1855 with the same name, which is now in the museum of the Academy of Arts. However, two years later he painted a wide panoramic view of Valaam, which did not meet the traditional ideas about the island. Klaudt showed Valaam not a primordial, but a transformed person, connected with his daily life. In 1857, for the “View on the Island of Valaam” MK Klodt was awarded the Second Gold Medal by the Academy. According to I. Kramskoy, this picture was one of the best at the academic exhibition of the same year. It is significant that even 20 years after the creation of the canvas, Kramskoy considered it an important stage in the work of Klodt. In one of the letters of 1877, he again mentioned this work: “

“View on the island of Valaam,” appreciated at its inception, later repeatedly attracted the attention of visitors to exhibitions and art. In 1882, the painting was exhibited at the All-Russian Exhibition in Moscow. By this time it belonged to KT Soldatenkov, one of the largest Moscow collectors. In Tomsk, the picture probably came through the State Museum Fund, along with other works owned by Soldatenkov, and later the Rumyantsev Museum, while losing its original name and the name of the creator. Today, its second birth took place.