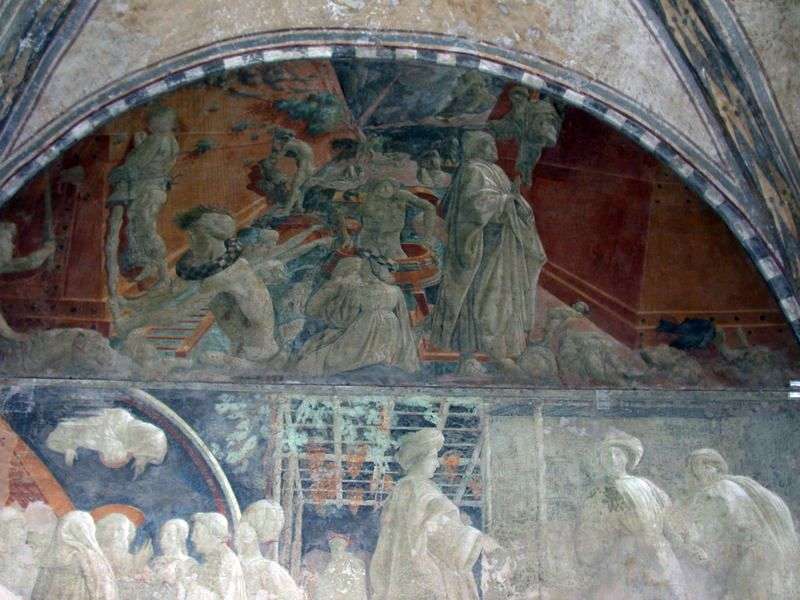 Over the painting of the Church of Santa Maria Novella worked several artists whose names, unfortunately, the story for us is not preserved. It is known only that Paolo Uccello was one of these several artists. Especial attention in the church of Santa Maria Novella deserves the so-called “Green Arcade”, named so because in most of the frescoes that adorn it, the green color predominates.

George Vasari was inclined to consider the “World Flood” the greatest of Uccello’s works, and many contemporary art historians join his point of view. The fresco really impresses with its majesty,

although it is in the most deplorable state. In “Biographies of famous painters,” Vasari asks about her: “He wrote dead bodies, a storm, a violent wind, flashes of lightning, twisted trees and rooted in horror as if he saw it all with his own eyes.”

Paolo Uccello combined here two biblical stories related to the history of the flood – the actual deluge and the end of it, when Noah lets out a dove from the ark. Masterfully built in the “World Flood” perspective, creating the effect of a funnel, a whirlpool sucking people trying to escape. Until now, the figure of the majestic old man, placed by the painter almost at the center of the composition, has not been identified. Some researchers claim that this is Noah. However, the figure of Noah is depicted to the right and above, right under the arch of the arch.