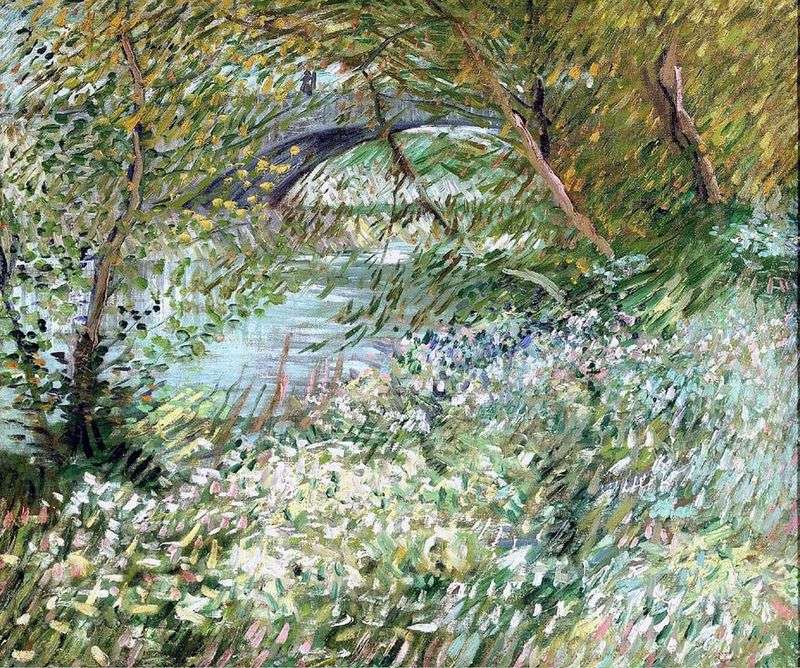 This is one of the open-air works of Vincent Van Gogh, performed in Paris in 1887. Going to the nature, the artist repeatedly chose the views of the Seine for the landscape. In spring, the banks of the river became particularly picturesque. The first greens and tender spring flowers evoked delight and forced the artist to create.

In this work, Van Gogh also depicted the banks of the Seine, but in a slightly unusual format. The river is barely visible through the dense thickets of bushes and grasses that cover its shore. Van Gogh specifically chose such a composition to show the spring bloom that struck him, which was the reason for creating the picture. He carefully writes out the tender green leaves, swaying from the light spring wind.

The whole upper part of the picture is closed by them, but it does not lose the feeling of lightness and airiness, which the artist skillfully transferred. Even the massive bridge in the background looks almost imperceptible and weightless.

Sensation of spring is transmitted and using a color scheme based on a combination of pastel gentle tones. The smooth surface of the water reflects the clear blue of the sky, and the flowers in the foreground are gently pale blue and light pink. All this conveys the author’s delight from the spring nature, its gentle colors, coolness and lightness.