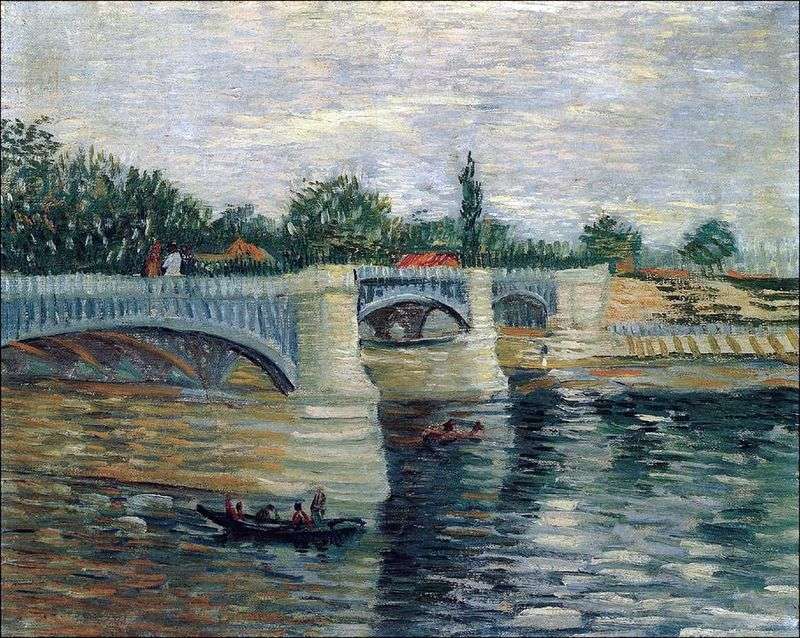 In 1886, Vincent Van Gogh lived in Paris, walking along the streets of which he was looking for inspiration for creating new paintings. The manner of his writing changes and the content of his paintings. The palette of his works becomes more calm and resembles the work of the French Impressionists.

The artist often works in an open air, writes the corners of Montmartre, the embankment and bridges of the river hay and other beautiful places of the city. The painting “The Seine with the Pontoon Bridge Grand Jet”, made from nature, depicts a river landscape with a bridge that is very close to the pictures of Camille Pissarro in color. This once again proves that Van Gogh during this period of creativity considered himself an associate of the Impressionists and a French artist whose painting belonged to France and to the whole of mankind. At this time, begins to form the artist’s picturesque manner, thanks to which his paintings are easy to recognize.

The artist writes with heavy dense shades of blue the surface of the water surface, in which the reflections of the surrounding objects are visible. In it you can see the shades of foliage of trees, cloudy sky, the construction of the bridge, which gives the picture the integrity of visual perception. Masterfully transferred by the artist water texture, written in wide horizontal strokes. Cold shades of the distant plan are smoothly intertwined in the buffy color of the shore and the greenery of the trees.

The painting “The Seine with the Pontoon Bridge Grand Jet” is permeated with light and air. Its color, based on a combination of warm and cold colors, creates a sense of harmony, tranquility and atmospheric landscape. But, despite this, the emotional state of the artist is felt, enjoying his work, which at the same time calms him and gives a new twist to the creative ideas embodied by the brush on the canvas.