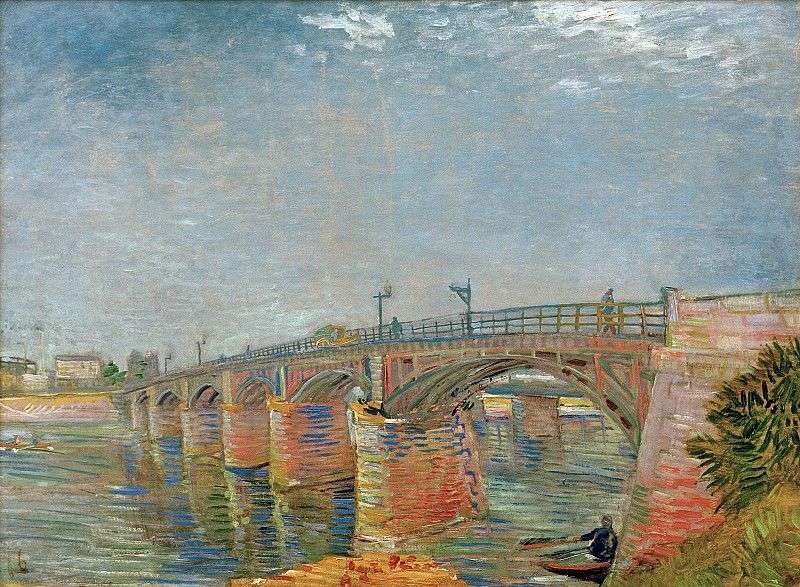 This painting Van Gogh wrote in 1887. It depicts one of the bridges of the Seine, which inspired the artist during his stay in Paris. Bridges were a frequent motif in the landscape of Van Gogh. But in this picture, the artist focused not on the construction itself, but on a game of stunningly bright colors that acquire unprecedented intensity under the scorching summer sun.

The whole picture is sustained in the most saturated tones, creating an atmosphere of joy and admiration for the sunny nature. The distant plan melts in the sunlight, which houses are flooded, the bridge and even, it seems, the sky itself. Cirrus clouds seem to glow from the sun, giving the sky depth. It takes up most of the picture, and the horizon and the far-away bridge seem to dissolve into it.

In the shadow part of the landscape, the color also does not lose its intensity. Van Gogh brings it to the maximum, depicting the fiery red bricks of the bridge, the water and the bridge itself, in which the bright colors of the surrounding objects are reflected. Small multicolored strokes of contrasting colors create the illusion of flickering, which makes the landscape even more sunny and saturated. The bright colors of the summer, with which the sunny motive is filled, convey the mood of optimism, bright hopes and cheerfulness.