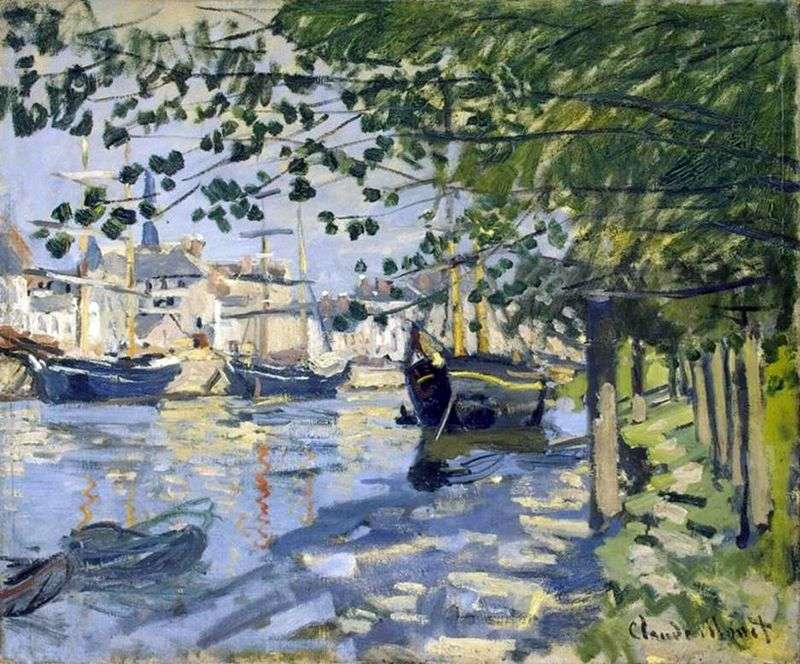 The painting “Seine in Rouen” was painted by Claude Monet in 1872, in the early period of his work. At the same time, his famous painting “Impression. The Rising Sun” was created, which marked the beginning of such an artistic direction as impressionism.

The artist has always sought to create as realistic and lively paintings as possible. But it was not enough for him to simply create a realistic landscape, the main task was to put into the canvas his impression of the contemplated landscape, which could change in a few seconds and hit the artist with a new force. The reason for such changes could be sunlight, wind, or just unusual things that are close to the key objects of the landscape.

Monet abandoned the classical methods of painting, which was taught in art academies, and invented his own technique, which was used by many other artists and his followers. The artist devoted a large role to light and shadow in his works. Claude trusted his gaze and saw the surrounding nature in a completely new way. It is because of this that many of his paintings look vague, as if everything on them is swaying from the wind. Although Monet’s landscapes are not distinguished by the clarity and expressiveness of the lines, but they are dynamic. This gives the impression that a small, small living world is captured in a small picture, and the spectator can only penetrate into it and be part of it. These features of Monet’s style can be seen in such well-known paintings such as “Impression. The Rising Sun” and “Gare Saint-Lazare.”

In this picture, the viewer sees the river Seine, which looks surprisingly alive. When viewing a picture, it seems that the river depicted in it with ships sailing along it, leaves of trees stirring from a light wind, is real, it is happening right now around the viewer. Another drop of reality and the viewer could feel that smell of river freshness, feel the cool breeze that fills the sails of boats and waves trees. All this is achieved by the artist through the use of that unusual impressionistic technique that adds to the paintings of life.