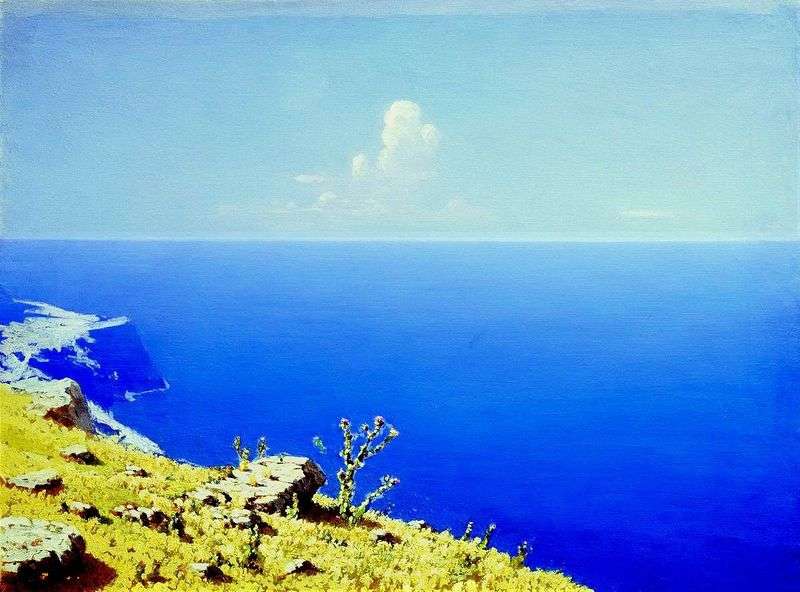 The great painter Arkhip Ivanovich Kuindzhi is a romantic among realistic artists. He perfectly conveyed the color of the painting, unusual lighting moments, creating the effect of glow of colors. Contemporaries did not understand this attitude to painting, and often he was reproached for an unjustified extravaganza of bright colors.

Kuindzhi was very fond of the amazing nature of the Crimea, and often depicted her in his paintings and sketches. The painting “In the Crimea” was written by Kuindzhi in 1905. To transfer the force of light effect in the painting, the artist specially emphasizes the gloomy, night, stormy sky and this goes against the laws of artistic truth.

In the foreground is a mountain slope, with a lonely pine stand. Behind it are standing alone pine trees and a solid strip of boron. The distant ridge closes the mountain range. The blue-black massif of the pine forest covers the mountainside and almost merges with the dark clouds that obscured the entire sky. Kuindzhi passed the moment when the lightning lit the forest before the approaching thunderstorm, the trees were lit by a bright electric light and therefore written in bright colors.

The artist strengthens the image of nature with the help of pictorial and compositional means. Kuindzhi did not use the air perspective, but passed the space in contrasting color combinations. The dark cold oppressive sky he contrasts with the warmed-up slope. Such a fantastic combination of colors fascinates the viewer and causes a feeling of anxiety.

The picture is written in broad strokes, the details are generalized. In the picture there is a pronounced decorative characteristic for Kuindzhi’s painting. The artist’s task was not to convey specifically the existing landscape, but to show the dramatic generalized image of the nature of the Crimea. This is not a portrait of nature, but an emotional perception of the artist himself.