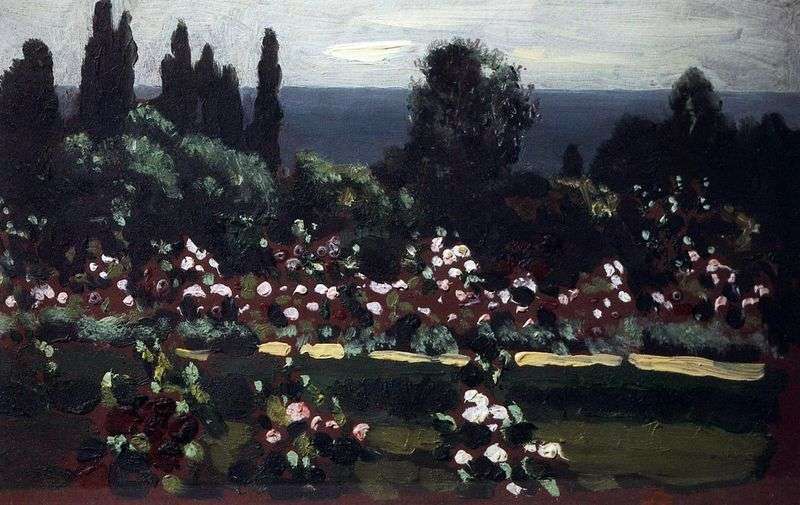 Many of the experimental things Kuindzhi performed in the genre of miniature. So, for example, the work “Sunspots on the hoarfrost, sunset in the forest” measures 18 x 11.2 cm, and “Flower Garden Caucasus”, 1908 – Their 17.5 cm. Any attentive spectator will notice that they are very close to the pictures impressionists and are the result of searches started by Kuindzhi back in the late 1870s.

It was then that he rejected tonal painting and began to exploit the brightest palette based on the system of complementary colors. He did it so brilliantly that he gave an excuse to I. Kramskoy to admit: “In Russia, in the landscape department, no one has discerned to the same extent as he, what colors complement and reinforce each other…”

However, it is not known what the leader of the Wanderers would say, who died in 1887, if he saw the late miniatures of Kuindzhi. Recognizing the merits of the artist in the field of pictorial plastic, he also discouraged with his hands in front of the first decorative impressionistic Kuindzhi experiments: “There is something in his coloristic principles, completely inaccessible to me… I see that the color on the white hut is so true, so true that my eye is just as tedious to look at it as a living reality: I turn my back and do not want to look any more. Is this an artistic impression? ” This question was positively answered by representatives of a new generation of artists, formed at the end of the XIX century.