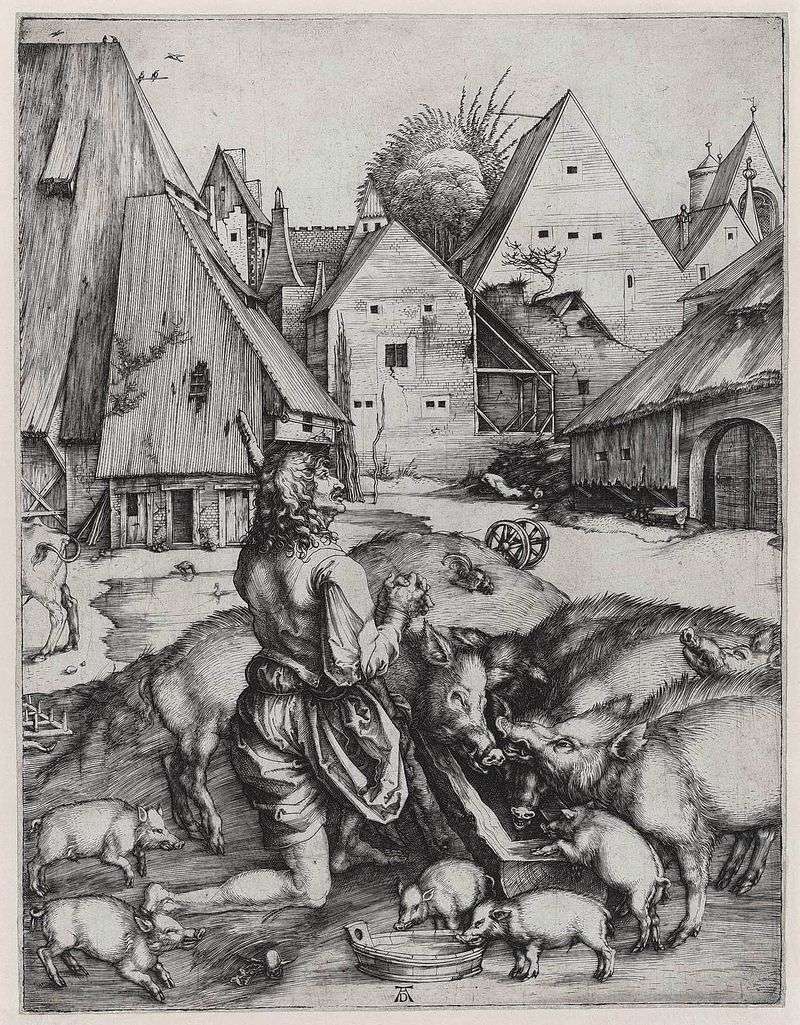 Among the evangelical parables especially close and understandable to people was the parable of the prodigal son. “A certain man had two sons, and the younger of them said to his father, Father, give me the portion of the estate that is next to me, and the father divided their estate… The younger son… went to the far side and there he wasted his estate, living dissolute. When he lived everything, a great smooth came in that country, and he began to need it, and went and joined one of the inhabitants of that country, who sent him to his fields to feed the pigs, and he was glad to fill his belly with the horns that ate pigs, but no one gave him. He came to himself, said how many mercenaries from my father are over-bread, and I’m dying of hunger! I’ll get up, go to my father and tell him: Father, I have sinned against heaven and before you. ” The repentant son returned to his father, and he accepted it with joy.

Durer has long worked on the engraving “The Return of the Prodigal Son.” He began with numerous sketches, looking for a composition. Finally the drawing was ready. He, however, only outlined what should appear on the engraving, it was simpler and more sketchy. The artist left himself the freedom to create a board: he did not predetermine every stroke, he did not intend to draw every movement. You can start engraving.

From distant lands, where the prodigal son wandered and served as a swineherd, Durer moved the action to the German peasant court. The yard is closely built up by buildings. The artist told the audience: to feel how you are torn from your father’s house, you can and not in a distant land, but next door to your own house. The essence is not in distance, but in inner alienation. High, closely pinned to each other’s houses close the courtyard from all sides. They leave no way out. The look rests on the silent gloomy walls. Houses around seemed to be extinct. The doors and gates are tightly closed, the windows are black and blind. And between the pack, the manure pile and the pigs around the prodigal son – all this forms the first plan – and the houses, tightly pressed together, lie the empty space of the yard.

Closure of the courtyard gives him something prison. Nothing grows on bare earth. Even a few trees near the house turned into bare sticks without leaves. The prodigal son, in rags, barefoot, desperately clasps his hands in prayer. It seems, you see how the fingers are pinched white, it seems, you hear the voice of the penitent: “Father, I have sinned against heaven and before you and I’m not worthy to be called your son.” The motive of human loneliness is heard in the “Prodigal Son” with a piercing force.