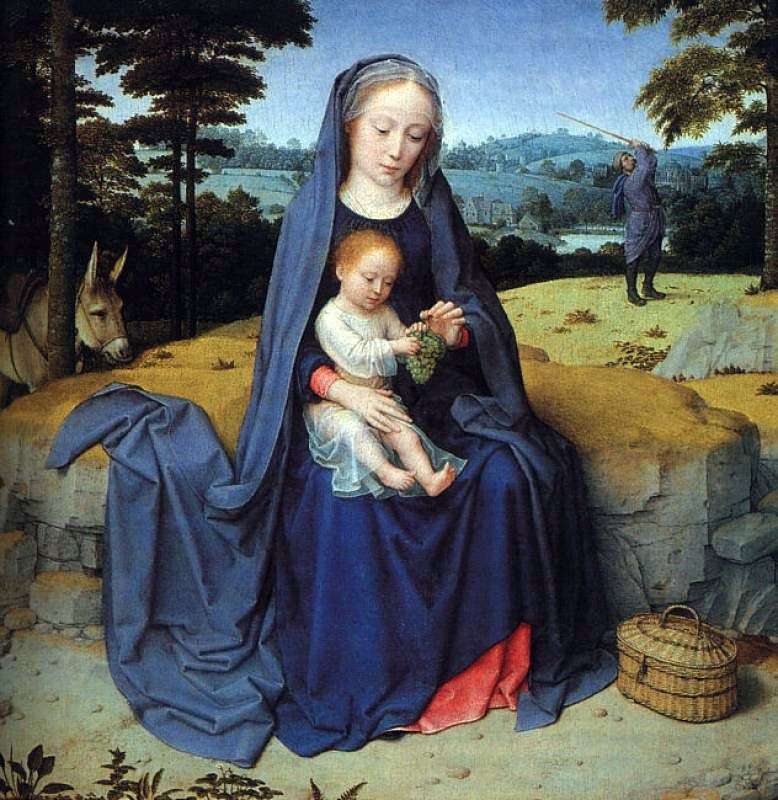 Stored in Prado “Rest on the way to Egypt” depicts the Virgin Mary, nursing the Infant against the background of the forest. The nature of Gerard David loses the undiluted cosmic properties inherent in the landscapes of his predecessors. He introduces the viewer into the real thicket of the forest, under the sprawling branches of trees.

The figure of the Virgin Mary in the center of the composition is written in the cold color scale inherent in the work of David. She looks like a silhouette against the background of ocher stones, to which she has sat down to rest. Lovely half-closed eyes, thinly contoured nose, soft, childishly swollen lips.

The face of Madonna is calm, she is immersed in her hard thoughts. The Madonna of Gerard David is a very young mother, almost a girl. Her soft reddish hair is wrapped in a veil of transparent veil. With one hand she holds the baby, in the same transparent attire, the other supports the breast, which feeds the child. Hands are beautifully written and amaze with their beauty. Next to Madonna there is a modest wicker basket on the stones. Behind her, a forest towers over which the travelers are moving. They can recognize the same characters – the Virgin Mary with the Child, and also Joseph, fleeing to Egypt.

Inclusion in the composition of the picture of episodes, related to the main theme, is a common reception of the art of the Northern Renaissance. Master lovingly writes out the landscape, not forgetting not a stone lying at the feet of the Madonna, nor a boring, struggling through stony soil. He admires the blocks of sandstone on which Maria sits, the roughness of the tree trunks, the blue of the sky. The color of the picture is bright, sparkling. Its surface shines like enamel. Everything speaks of the virtuoso skill of the artist, fully revealed in this picture.

The painting was performed at the end of David’s creation, when Dutch art was influenced by Italian painting. Apparently, because of this the composition of the work is pyramidal. In general, “Rest on the way to Egypt” Gerard David fills with a feeling of deep pacification and depth in themselves.