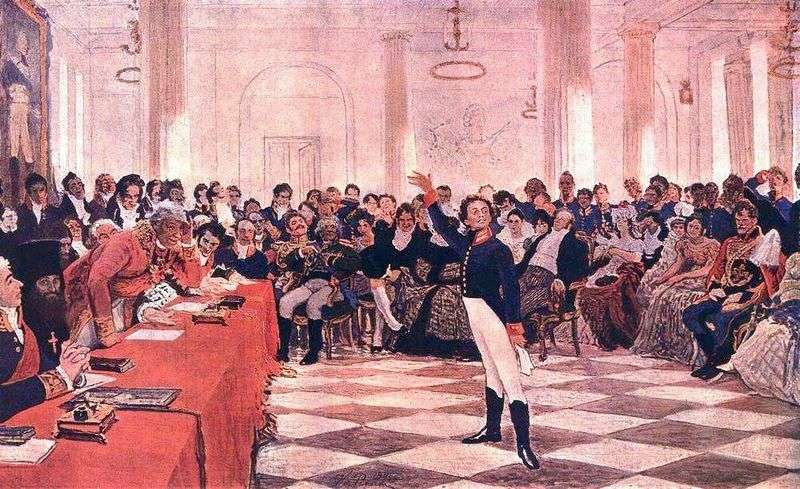 The painting was commissioned by Repin for the 100th anniversary of the Imperial Lyceum in Tsarskoye Selo on the initiative of the Lyceum Society. According to the memoirs of contemporaries, the artist became a real “pushkinist” during the preparation of the painting, because he read a lot of literature about Lyceum stage of Pushkin’s biography.

The composition of the picture is realistic. The Great Lyceum Hall with columns, reliefs and a portrait of the emperor in the background is full. In several rows sit and stand the audience – representatives of the noble families of Russia, as can be seen from their rich clothes.

Among them are officials, military, clergy, grandees. In the foreground is a young Pushkin in a characteristic theatrical pose – at the height of the exam, at the time of reading his famous poem “Memories of Tsarskoye Selo”. On the left is a table covered with red cloth, followed by a judge. Including – the poet G. Derzhavin. Fascinated by the talent of 15-year-old Pushkin, he raised himself to hear better what he was reading.

The center of the composition is the figure of the young poet. He stands on a relatively open space, in an unusual pose. None of the people located behind and on either side have such a bright face. White pantalons, buttons on tails are striking.

Above the image of Pushkin, Repin worked for many years, painted at least a hundred portraits – either with one turn of the head, now with another, now over the evening river, now over the morning, then in one frock coat, now in another, then with an elegiac or pathetic smile – and still was not happy. According to the memoirs of K. Chukovsky, only in this picture he “changed so many faces, constantly varying them, that would be enough for them to populate a whole city”.