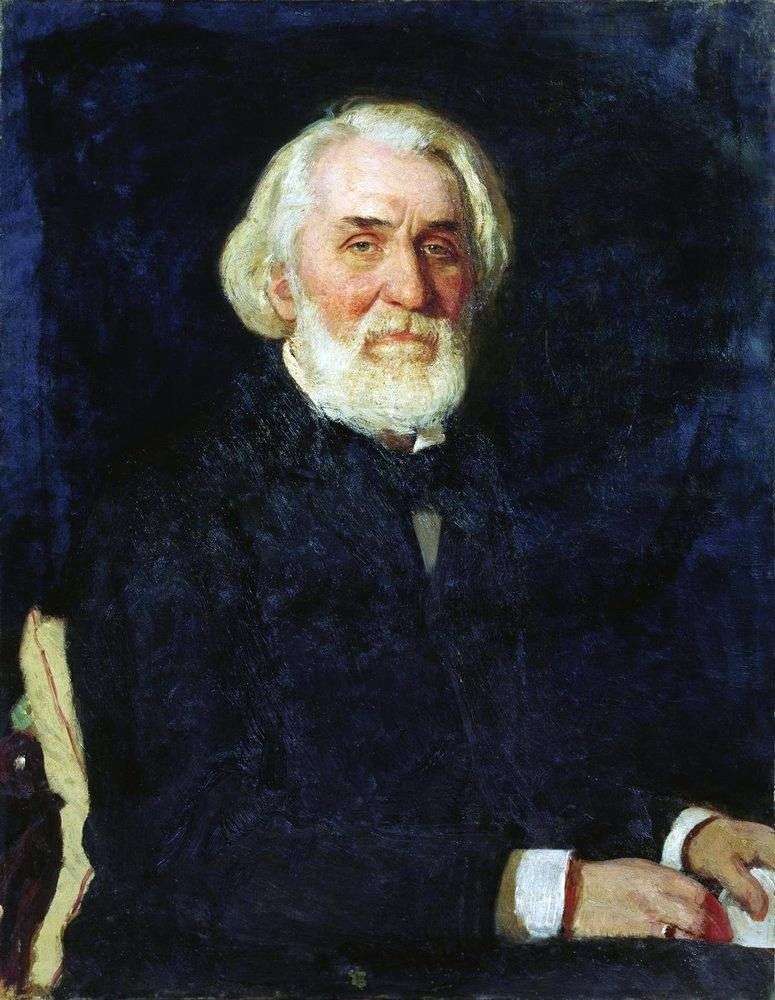 The gallery of portraits painted by I. Repin is huge and all-encompassing – he painted writers and academicians, noblemen and writers, Italian sitters and barge haulers on the Volga… the spirit of an era that is changing year after year. It differs from the other masters of the brush in that it uses innovative psychological techniques – Repin conveys human thought and the human mind.

A descendant of the archers, who found both many classics of literature and the arrival of Soviet power, Repin was a genius: he was a topographer, wrote icons, made heads from plaster, but is best known as an artist. Glorified his painting “Barge Haulers on the Volga”, replicated in all history books.

Speaking about the portraits of this artist, you can name any classic of Russian literature and you will get “in the bull’s eye”. Why are only the names of Pushkin, Aksakov, Ge and Turgenev! The latter is known to each of you who have studied at school “Fathers and Sons”. But there is something that they practically do not know about Turgenev.

For example, about his stormy youth. He could call on a lot of people and accidentally “forget” about them. The next day, the owner appeared, apologized, and promised a “feast to the whole world.” The guests agreed, came again, but Turgenev ignored them again.

Originality in the clothes of the young dandy was not to occupy: he flaunted in a blue dress coat with buttons in the shape of a lion’s head and checkered trousers, for which he received the nickname Khlestakov.

It must be said that originality was a family trait. When the future writer studied in Germany, he spent his parents’ money right and left; the priestesses of love and drinking were things in order for him. Mother got tired of it, and she sent him the last parcel, filled with bricks. To say that the young rake gasped is to say nothing.

Geniuses are peculiar to strangeness, the same was true of the author of “Fathers and Children”. His laughter was simply infectious and the surrounding people fell to the floor with laughter in the truest sense of the word. When Turgenev visited the traditional “Russian bland”, he often stood in the corner with a cap on his head.

The writer was distinguished by a maniacal desire for order, as well as he was pathologically clean. He wiped himself with a sponge cologne several times a day, and before he got to work, he certainly brought order to the table. The writer could wake up in the middle of the night and put the book in its place. Turgenev was a perfectionist – he could not be at the table, on which there were no paired appliances.

How Repin managed to cope for the second time with all the oddities of this genius writer remains a mystery, but, nevertheless, he did not depart from his favorite theme of realism and in 1879 saw the portrait of I. S. Turgenev, who had already been recognized and readable writer. His life experience, unrequited love for Pauline Viardot, “Fathers and Sons”, family dramas – all could not but affect the perception of the surrounding world, which Repin so skillfully noticed.

Interestingly, this was the second portrait writer image. The first picture he ordered was P. Tretyakov, but neither Turgenev nor the artist himself liked it. The painter explained this by another factor – Polina Viardot, whose opinion was highly appreciated by the writer and relied on him in everything. She rejected this portrait and asked to write a new one, but in a different turn. Turgenev listened to his old love and all the artist’s convictions failed, and the first portrait itself turned out to be inanimate and dry.

Only 5 years later Repin was able to write a new portrait in which you can see a humane, majestic and wise writer. From the picture breathes psychology – the whole composition is so thought out that the face and hands do not seem drawn, but fashioned from living plastics. The image of the second portrait is monumental due to the lowered horizon, black jacket, written in broad strokes and emphasizing the smooth silhouette of the figure. Light on the canvas only the hands and head – thus Repin balances the composition.

If we talk about the prevailing palette of colors in the picture, then at first glance it seems that this is a black tone. On closer inspection, you will see smears of terracotta on the wall, or soft golden drawings on the chair. In addition, the master took advantage of the white color for Turgenev’s beard and hair, which are played by mysterious golden reflections. Another, inconspicuous, at first glance, bright color on the canvas is red cufflinks on the writer’s sleeves. The twilight surrounding the figure with barely penetrating reflections makes it necessary to focus all attention only on it, that is, Repin does not write anything superfluous.

To fully embrace the idea of the artist, it is worth looking at the appearance of Turgenev. You will see in his eyes wisdom, and sadness, and confidence, but the main quality is calm. Vanity and impulses are more characteristic of young and ambitious people, but in the portrait it is a wise life and a lot of people who have achieved it. Turgenev frowned, but only slight wrinkles touched his forehead. It has nothing to do with discontent – he is trying to discern either the artist or the viewer. The very pose of the writer seems both simple and stately. It combines Jupiter’s pagan “mastication”, which is reminiscent of gray hair, piercing eyes and beard, and some biblical motifs in a calm and peaceful expression of the face. The aristocratic picture of the picture is transmitted by the pince-nez in the writer’s right hand, and it also explains the wrinkles on the forehead and narrowed eyes. Another feeling that is reflected in the eyes of the writer is the longing. He longs for his native Spassky, or about youth, or about unrequited love – the viewer will never know.

Russian painting today without Repin’s masterpieces is simply unthinkable, because they are unique, and the historical accuracy of these canvases is obvious. All his portraits characterize penetrating psychologism, lines and figurative composition of the picture. It is not for nothing that the portrait of Turgenev is considered a small historical fragment that shows all human feelings and a long journey of a genius towards the search for the meaning of life.