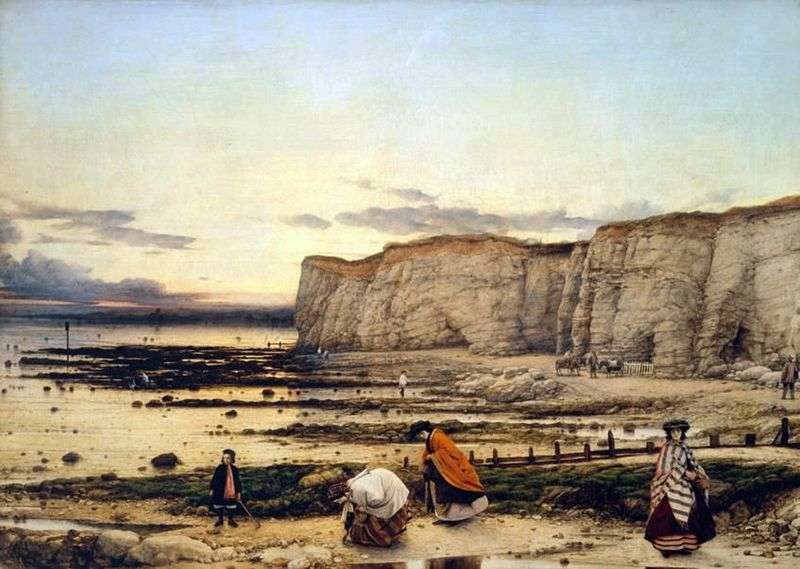 Working on a series of frescoes for the Houses of Parliament during the last two decades of his life, Dice completely independently developed a style that was not radically different from the Nazi-inspired historical painting represented by the painting “King Joas releases the” arrow of deliverance “- mainly influenced by the Pre-Raphaelite style. Dyce’s canvases served as the starting point for young artists of the Pre-Raphaelite Brotherhood for their own rethinking of historical images, and their landscapes in turn had a profound effect on the images of nature in Dice. “Piguel Bay

in Kent” – the most vivid example of the author’s borrowing pre-Raphaelite aesthetics; to it, he resorts to a heartfelt series of small paintings on religious themes in the late 1850s.

Dice started painting in Ramsgate, where he rested with his family. He portrayed his loved ones as if in a frieze unfolded throughout the foreground: in the center – the artist’s son and wife, on the edges – his two sisters, and all are written out with the subtle grace of portraits-miniatures. They are all warmly dressed and wrapped in a muffler – the autumn evening is cool. He painted himself with artistic accessories in the background on the right. The foreground is replete with small details, such as mollusc shells and egg capsules of rays along the entire tidal boundary.

The view opens mainly to the west-south-west, thus the sunset on the east bank appears from an unexpected perspective, and the time of day is defined as an early evening – about half-past six. Comet Donati with its right-tipped tail is clearly visible in the western part of the sky, from above in the center of the composition. Only five days before the comet approached the Earth and settled exactly between the planet and the Sun.

A more global Dyss theme is thinking about the transience of being. Markers of the geo-Japanese era – chalk cliffs in the middle plan; At the base of the caves are cut and yet they are firmly on the ground. This time is transmitted by means of a tailed comet at the top of the cycle implied by sunset. The time of human life is represented in people of different ages and occupations, which are depicted here and there in the picture: some, the workers of the coast, are engaged in the most usual work; others, middle class, indulge in fashionable leisure activities. Dice paid special attention to the appearance of his wife, carefully writing a scarlet sunset reflection behind her and a striped blue and white shawl, horizontal lines echoing the folds of chalk cliffs in the background.

Comet Donati was the first of the comets captured in the photo – literally eight days before the date that is immortalized on the canvas: it was photographed by William Asherwood from Dorkin, but the picture, unfortunately, was lost. Dice’s picture is supposedly based on a photograph that was also not preserved, and was made in almost monochrome, typical for a photograph. However, there is a more colorful watercolor sketch with the image of the species slightly east of the bay.

Preparatory sketches of paints are found in the Pre-Raphaelites – Hunt drew such a sketch for the picture “Valentine saving Sylvia from Proteus”, and Brown created several sketches for the painting “Trud”.

The difference is that Dyce, faithful to academic education and methodology, the final version of the canvas wrote in the studio, and not in the open air, as was the case with the Pre-Raphaelites; despite this, it is quite pre-Raphaelite in style and depth of the image and by special attention to actual details and signs of time. At the same time the palette of the picture is more subdued than in other similar works of the late 1850s. This work, as well as the portrait of Ruskin’s brush Milles reflects the specifics of the artist’s chosen place. Nevertheless, the image of the clouds and the fading pink reflections in the left corner in the background may echo the twilight effect that Millier tested in “Autumn Leaves” and in “Valley of Eternal Peace”.

At first glance, the “Pigwell Bay in Kent” may seem just a seaside view on the edge of “picturesque”. In fact, it is a clearly verified composition, built on a rigid geometric framework, divided by internal elements into ten equal, parallel vertical bands. It is as if fixed by the central vertical, which is drawn from the comet in the sky through the middle figure, the staff on the left shoulder and further down to the center of the lower edge of the picture. The concept of Dice is the whole science of landscape arrangement.