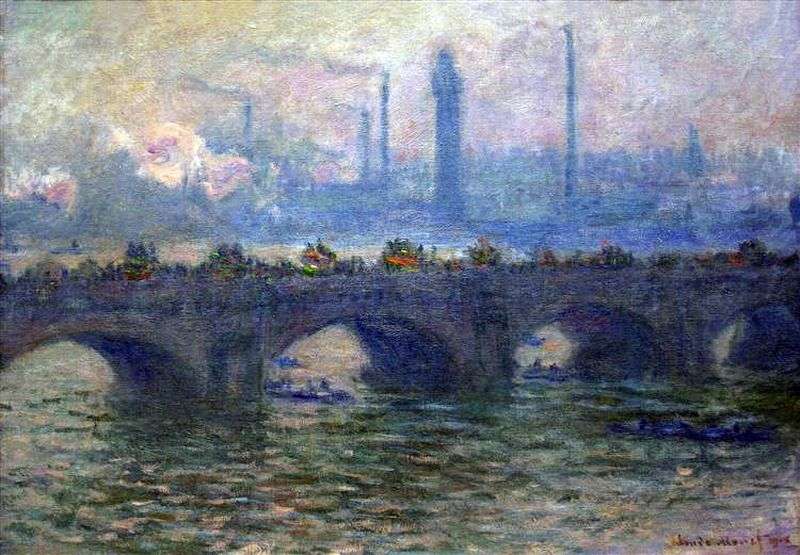 Monet is best viewed at a certain distance. Lilac color fills all her space, but the web can not be called monotonous – river and sky made lighter than the bridge. On the canvas spectator view offers a charming, soft, air-light and peaceful views of the River Thames.

The dense and at the same time difficult to tangible volume of product has been made by the artist through the use of a huge amount of tonal transitions, shades which sometimes subtle. The whole tone range is quite wide and includes a color from dark blue to bright purple. But these color transitions are made so skillfully that when looking at a picture at close range the viewer does not see in front of you nothing but the web, which caused frequent thick strokes of paint.

All the magic of this piece is revealed when the viewer moves away from painting for some distance. First, before the eyes begin to appear incomprehensible outlines a semicircle passing through the center of the picture, then appear the obvious silhouettes of boats and have a distance of about two meters from the picture sharply drawn and arranged in a single track all the details of the work.

Now before the eyes of the viewer appears smoky air landscape with the image of the arch of Waterloo Bridge, connecting Westminster Bank and Sout, barges, sailing under it, and depicted in the background smoking chimneys industrial area of London.

Despite the overall fluidity of images and smooth tonal transitions, each individual element of the picture when we look at very clearly stands out. This striking effect Monet was able to achieve through the use of a sharp tonal gradation in the transition from the imaged object to the background. Especially look charmingly depicted by the artist reflected on the water, cast by the arches of the bridge. Creating the impression of an absolutely heavenly, as if covered with some kind of sleepy haze, they at the same time convey quite realistic images. Such a perception of the image contributes to realistic transfer movement in the picture.

Foreground of the picture with it is depicted on the River Thames sailing barges and executed by the artist in a little more bright colors compared to the background. This Monet used the frequent smear medium size, moving diagonally from the middle of the canvas from left to right. The same little oblong strokes author blurs the outline of the barge, creating in this way not only the effect of the fog, but also a sense of the flow of the river. Due to the opposition of its sky, shown in the background in darker colors strokes that do not have a common focus, Monet even more strengthens the dynamism of water.

Another interesting fact is that the artist is to attract the viewer’s attention to a picture using a special technique that works purely on the psychological perception of reality. In life, a person caught in the fog to see the object, it is necessary to approach close to him. In the picture the author went on the reverse, familiar to human understanding of the phenomenon. And this successful trick worked.

Reflected in the rearview mirror, they come to the attention of the driver in neotrazhёnnom form. Thus, the artist was able to skillfully take advantage of not only his outstanding artistic talent, but also to draw attention to a rich palette of colors created by them, acting not only on visual perception, but also the psychological reflex.

Monet became famous thanks to its unique ability to transmit on canvas fleeting moments of the surrounding reality. After all, no sunset or sunrise, or fog can not continue indefinitely. And the artist holding a brush, you need to have time to capture those magic moments on the canvas! With this complex creative task Claude Monet coped brilliantly.

The extraordinary talent of the artist’s contemporaries explained by the presence of his supersensitive view, through which he was able to notice the smallest play of light and create the most subtle color gradation, giving the artistic image of harmony and realism.