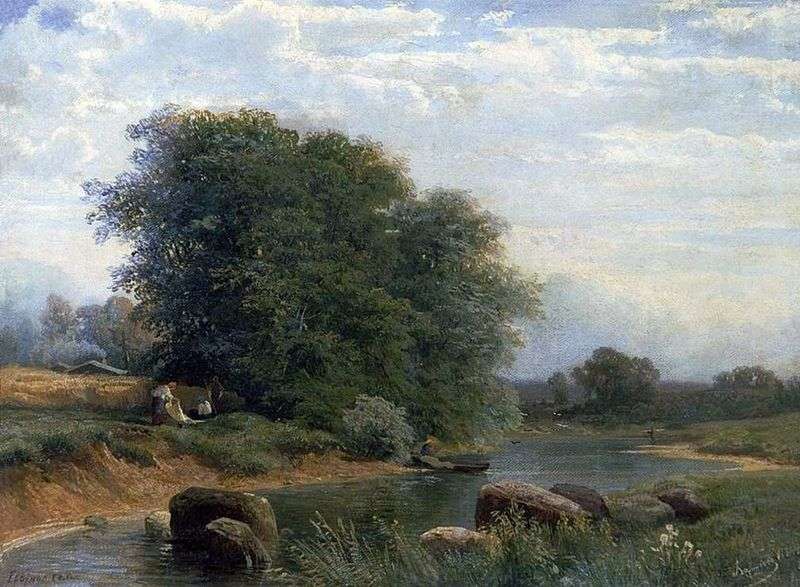 At the end of the 1860s Fedor Alexandrovich Vasiliev entered the art. Undoubtedly his talent developed extremely fast. This was recognized by all his contemporaries: both artists and critics.

In the beauty of nature, Fedor Alexandrovich saw a deep moral sense. He believed that beauty can turn a person away from criminal intent. He was able to convey the transitional states of nature exceptionally accurately. In his landscapes there is always a living excitement of the artist, in love with nature and seeing in it a reflection of the thoughts and feelings of a person. But the talent of the young artist did not manage to turn in full force due to premature death.

All that Vasiliev could achieve at the first stage of his painting classes is most clearly revealed in his works of 1868 related to summer life in the village of Konstantinovka near Krasnoe Selo near St. Petersburg. Once there for some time again around Shishkin, his authoritative mentor, Vasiliev actively learns pictorial mastery. For a young painter, inclined to see the world excitedly and poeticly, it was difficult to find a more useful and sober school.

Shishkin taught Vasiliev to see the diversity of forms of nature, to distinguish between the construction, the nature of trees and leaves. He inspired the student with a love for careful observation, for analysis, and for the very process of artistic work.

We do not know in what order Fedor Vasilyev created the works of this year that survived to us, but the conditions of his life brought him to the motives of the rural landscape, which turned out to be an everyday life environment for the artist. We have reached relatively few drawings of the artist, dating back to 1868. On the paintings, he worked a lot and seriously, and it earned him an official recognition in the form of the first prize at the Society for the Encouragement of Artists competition for the painting “Near Red Village.”