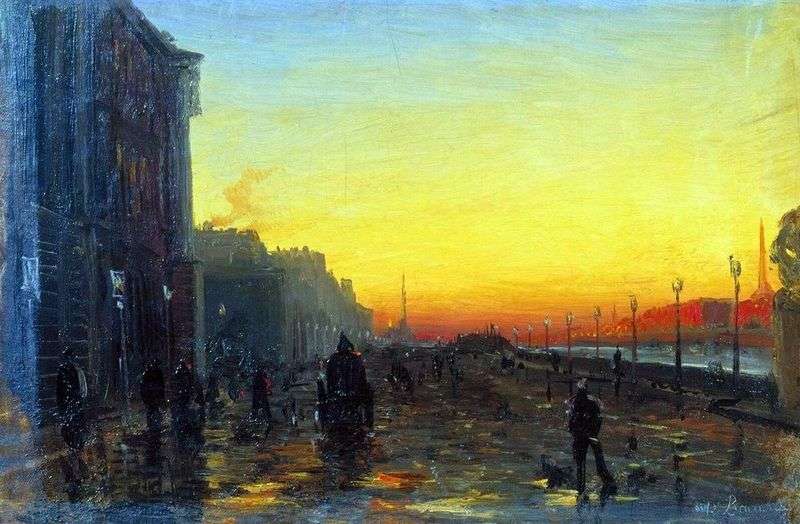 A significant part of the very short life of Fedor Alexandrovich Vasiliev was held in St. Petersburg. This life can not be called happy and cloudless.

In search of a better share and material wealth from Gatchina, the family of the future artist moved to the young capital a little after the birth of Vasilyev, however, most of his earnings the head of the family either dumped in cards or drank.

But, despite the difficult situation, Vasilyev did not transfer these grim gloomy memories to the city itself, thereby having accomplished a kind of ideological revolution in the usual canons of depicting city landscapes by the Wanderers. He did not seek a social problem, denounce the inequality of social reality, did not raise other common problems, which were habitually called upon to gather on a mobile society – a young painter seeks beauty and romance in the city.

His Petersburg is not an easy city, but a place, a vision from another magical world. It is not for nothing that the master portrayed St. Petersburg in the rays of the dawn! A wide avenue in the yellow-orange glow, slender houses, stretching sky-high street lamps, a mirror pavement in which the dawn is displayed, people moving steadily and crews – the whole city looks not only magically beautiful, but some solemn and otherworldly in its exceptional beauty.

Most of the picture is occupied by the sky, beautiful and so different. Here all the shades are gathered – the saturated blue gradually turns into a whitish color, then to find a golden shade, and gradually satiated with it, turn into a bright orange horizon. Fyodor Vasilyev was dubbed “artist who discovered the living sky” after the death of Nikolay Ge, immediately after his death, and this canvas confirms his words as well as possible.

During his lifetime, the artist did not have time to be full of glory, not because he was not recognized, on the contrary, the great talent of the young master was immediately noticeable and admired the more eminent Kramskoy, Repin and other Wanderers, besides, the brilliant young man was a notable personality in aristocratic circles, and has won several patrons. Vasilyev just died very early, before he could gain the all-Russian and world glory, he simply did not have enough time. And today his paintings still excite the public, giving it all the same magical effect. Time does not have power over his spiritual masterpieces.