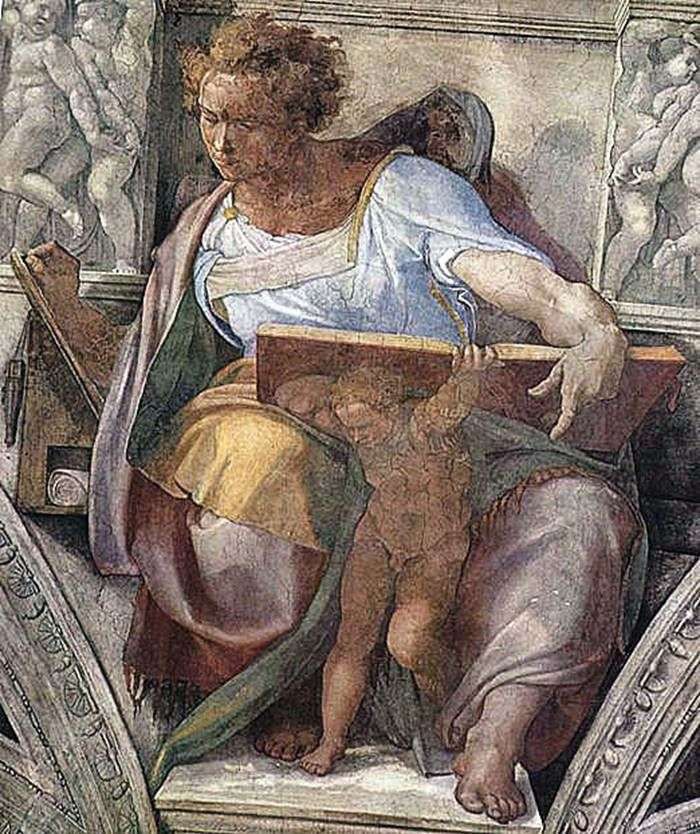 Fresco by Michelangelo Buonarroti depicting the prophet Daniel. The painting of the ceiling of the Sistine Chapel of the Cathedral of St. Peter. Daniel, in the Bible, is the righteous and wise prophet, whose life and visions are described in the Book of Daniel.

In the period of the Babylonian captivity, Daniel was left at the court of Nebuchadnezzar and given him a new name, Belshazzar. Together with three other young men, Daniel refrains from unclean food from the royal table, but miraculously receives beauty and bodily health.

In the episodes of the Book of Daniel the Prophet, the young man, among

others, is called upon to interpret the dreams of Nebuchadnezzar, and with the help of Yahweh he interprets them as a prophecy about the coming five world powers. Shaken by the wisdom of the prophet, the king makes Daniel “the chief commander over all the wise Babylonians.” In another case, the royal dream Daniel interprets as a foreshadowing of the coming madness of the king. Chapter 3 describes an episode with three boys in a furnace in which Daniel himself does not participate, but this story is amended in chapter 6, where, on the orders of Darius, Daniel is thrown into a ditch with lions.

Seeing the prophet unscathed, the king frees him. During the feast at Valtasar, Daniel, the only one of the wise men, reads and interprets the mysterious inscription. In Greek translations of the Book of Daniel the Prophet, there are a number of apocryphal episodes: he exposes the pagan priests, destroys the dragon, which the Babylonians worship, etc. Among these episodes in European art, the story of Susanna, falsely accused by the elders of treason to her husband, was popular.

Here, Daniel acts as an Old Testament judge, exposing slanderers. Chapters 7-12 constitute apocalyptic visions in which the coming of the Messiah is predicted; for the first time in the Bible, the idea of the Last Judgment, the resurrection of the righteous from the dead, is definitely expressed. These visions are the earliest known to us of the Jewish works in the apocalyptic genre. Daniel as an ancient righteous and wise man is mentioned in the “Book of Ezekiel” along with Noah and Job. According to the orthodox tradition, it is believed that the author of the book was Daniel himself, who lived at the court of Nebuchadnezzar II and Darius I.

Researchers at the Tubingen school believe that the author’s knowledge of historical realities dates back to the time of the persecution of the Jews of Antiochus IV Epiphanes, but the author is unaware of the king’s death, and this concludes that the book was created in the 2nd century BC. e., despite the fact that the image of Daniel is much older. Modern researchers have up to five editors, compilers of the Book of Daniel the Prophet. In a new way, the findings in Ras Shamre of fragments of the Ugaritic poem of the mid-2nd millennium BC made it possible to look at the image of Daniel. Oe., whose father, Akhata, bears the name of Danniyil, that is, the name of the biblical prophet dates back to pre-Jewish times.

The traditions of Daniel and Qumran manuscripts are repeatedly stated. Virtually all episodes of the book of Daniel were extremely popular in European art, and some of them became sayings among all nations. The image of Daniel in the lion’s den, became a symbol of the coming resurrection of the dead, heralding the resurrection of Christ.