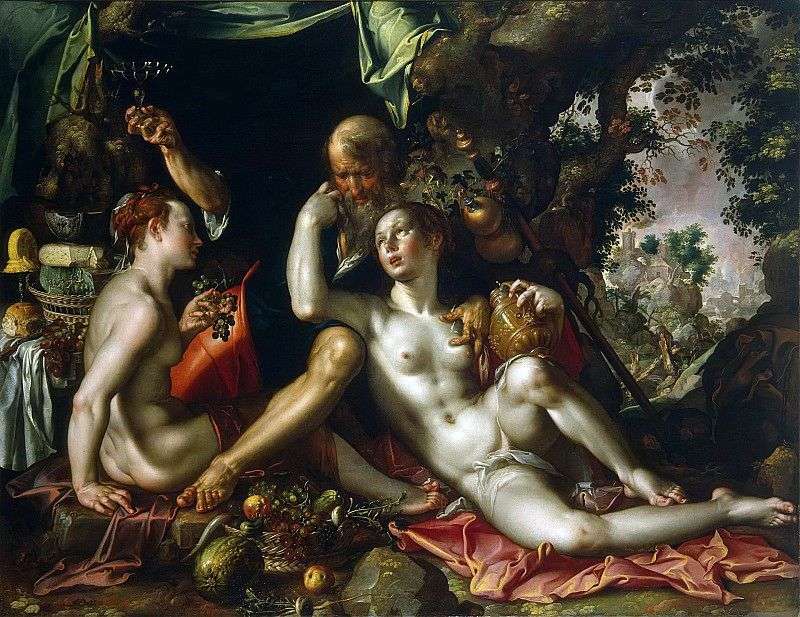 Painting of the Dutch painter Joachim Eytival is written on the basis of the Old Testament plot. The size of the picture is 209 x 166 cm, canvas, oil. From the Bible it is known that God condemned the cities of Sodom and Gomorrah to death for the fact that their inhabitants were mired in sin. Abraham begged God for mercy, believing that there are at least ten righteous men in Sodom; Then Yahweh sent angels to Sodom to test the inhabitants of the city.

Lot and his family were the only righteous in the city, and the angels led them out of Sodom’s doomed death, forbidding anyone to look back. Lot’s wife violated the ban, and was turned into a pillar of salt. Lot with his daughters hid from the horror of the perishing Sodom and Gomorrah in the caves.

Daughter Lot, believing that the entire human race perished, having watered his father with wine, entered with him into an unnatural incestuous relationship. Later they gave birth to sons from their father. According to the Old Testament, their sons, Moab and Ben Ammi, became the ancestors of the Moabite and Ammonite tribes. Pictures Joachim Ejtevala mature period of creativity is characterized by a certain softness and frankness of the picturesque manner.