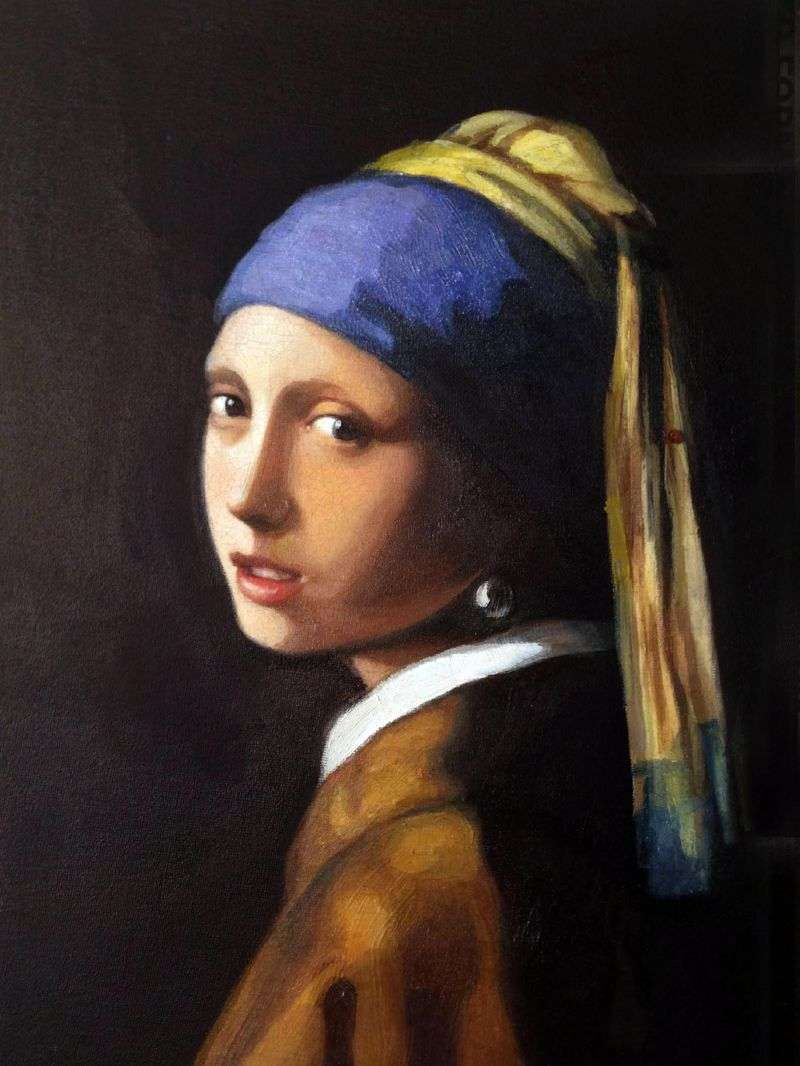 Painting of the Dutch painter Jan Vermeer of Delft “The Girl with the Pearl Earring”. The size of the portrait is 44.5 x 39 cm, canvas, oil. The picture of the artist Vermeer is very simple and concise, there is not a single extra detail in it. The dark background, which was originally dark green, is divided by a portrait into unequal parts, which gives the picture only more vitality and reality.

The folds of the vertically falling yellow fabric of the trendy 15-17th-century turban in the Netherlands emphasize the tender oval of the young girl’s face. The posture of the portrait is rather

unusual for a portrait, probably Vermeer sought to capture a moment of easy or impetuous movement. The girl looks at the viewer from the portrait for more than three hundred years and all this time she keeps a mysterious silence, although her mouth is half-open, but the girl’s words have remained the artist’s secret.

The painter’s contemporaries highly appreciated the talent of Jan Vermeer Delftsky in the portrait of a girl with a pearl earring, the painting sometimes appeared as “Mona Lisa of the North” or “The Dutch Mona Lisa”.

There are several versions about who posed for the artist. The most common assumption is that the model of the artist for this picture was the eldest daughter of Vermeer Maria, who at that time was about thirteen years old. There is also an opinion that the painting depicts her the same age, the daughter of the famous Delft philanthropist Ruywen, who was the patron and connoisseur of the art of Vermeer.

This portrait of Vermeer is the most famous painting of the painter. There is a book “Girl with a pearl earring” writer, author of free historical novels Chevalier Tracy, in which it is suggested that Vermeer’s model in the portrait was a young servant and mistress of the artist Grid, as well as a film based on the novel’s novel.