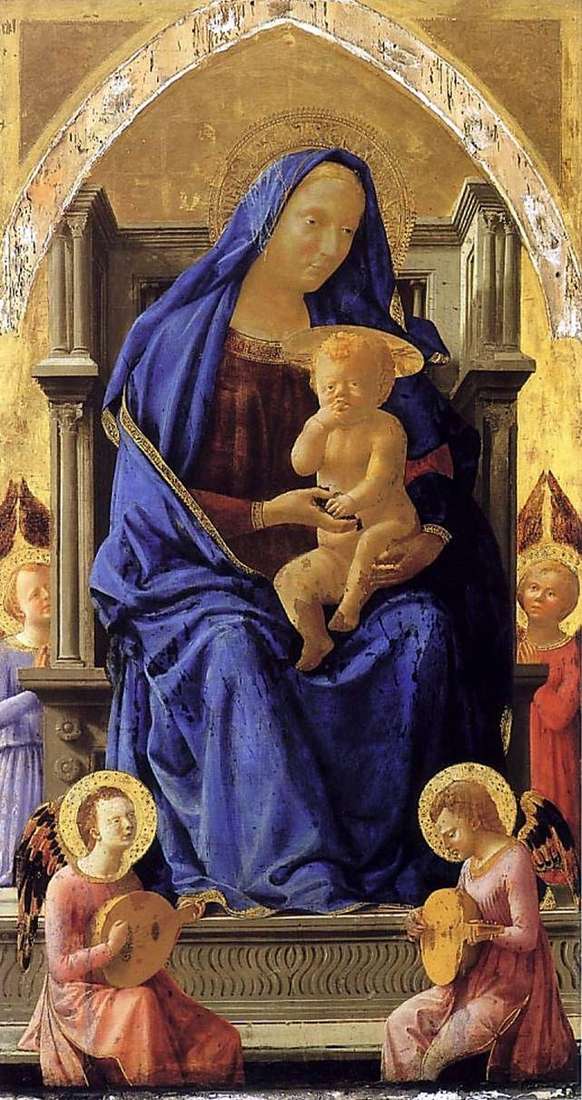 London Gallery owns the central part of the polyptych Madonna with Child and four angels, ordered by Masaccio in 1426 for the chapel in the church of Santa Maria del Carmine in Pisa. The decorative style, so widespread in the painting of the beginning of the 15th century, is alien to the works of Masaccio. In them, as in the works of his predecessor, Giotto, everything is subordinated to the perspective construction of space and the use of light and shade. Here and in the Madonna with the Child and the angels decorative elements recede into the background.

The interpretation of the image, as always with this

master, with apparent simplicity has some kind of his own individuality and inner strength. Madonna sits on the throne, built strictly according to the laws of the perspective of Giotto. Her figure is written with confident and precise strokes, which creates the impression of sculptural volume. Her face is calm and sad, a detached look is directed to nowhere. Wrapped up in a dark blue cloak, the Virgin Mary holds the Baby in her arms, the golden figure of which stands out sharply against a dark background.

The deep folds of the cloak allow the artist to play with light and shade, which also creates a special visual effect. The baby eats black grapes – a symbol of the Eucharist. Immaculately painted angels surrounding the Madonna give the picture an additional emotional sound. (Saints Jerome and John the Baptist – the only leaf, written by Masaccio for a two-way triptych.