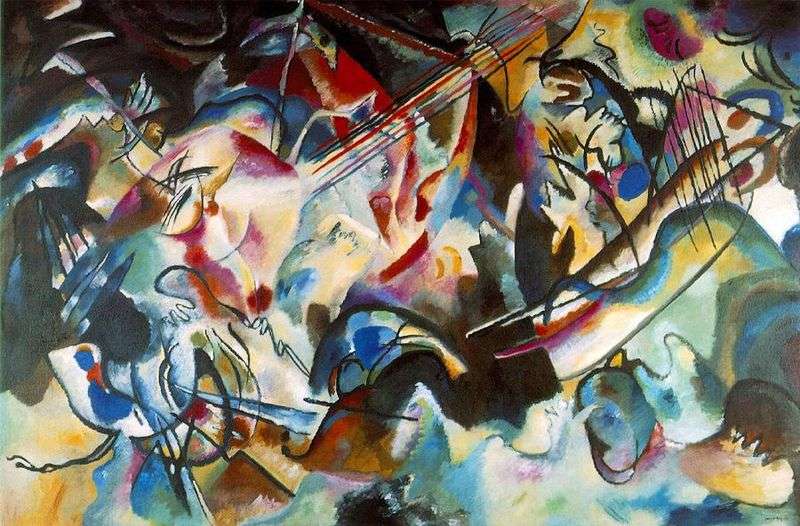 Composition VI expresses the possibility of being caused by a major catastrophe. In this work, the destruction of the material world is determined by the forms and phenomena disintegrating before our eyes, as well as the dissolved silhouette in the fog.

Vasily Kandinsky wrote about the picture: You can see two centers in the picture: 1. On the left there is a gentle, pink, slightly blurry center with weak, indefinite lines. 2. On the right appears a rough red-blue center, which is somewhat discordant with sharp, unkind, strong and very clear lines.

There is a third between these two centers, which can only be recognized gradually, but it is the main center. Here, the white and pink colors are foamed in such a way that they seem to lie outside the plane of the canvas or some other ideal plane. Most likely, they float in the air, and look like a shrouded in steam. One can observe a similar lack of plane and uncertainty of distances, for example, as in a steam Russian bath.

A man standing in the middle of a couple is not close and not far away, he is somewhere. The internal perception of the whole picture is determined by the main center located “somewhere”. I worked a lot in this part, until I achieved the effect: at first it was only my vague desire, and then it became more and more clear inside of me.

Small forms of painting required a very simple and very wide effect. For this I used long solemn lines, which I already used in “Composition 4”. I was very pleased to see how this device, which I used once before, produces a completely different effect here. These lines are connected with the heavy transverse lines that pass through them intentionally at the top of the picture, and come into direct conflict with them.

In order to mitigate the impact of too dramatic lines or, in other words, to hide the dramatic element too intrusive, I painted a fugue of pink spots of different shades. They create great excitement with the big world, and give the objectivity of everything.

On the other hand, this solemn calm mood is disturbed by various blue spots, giving an internal feeling of warmth. The warm effect of color, which is cold by nature, reinforces the dramatic element, but again it is done objectively and sublimely. Deep brown forms introduce a note is expressed absent-mindedly, which resembles an element of hopelessness. Green and yellow colors enliven this state of mind, giving it the missing activity.

I used a combination of smooth and rough areas, as well as many other ways to surface the canvas. Thus, the viewer experiences new emotions emanating from the picture.